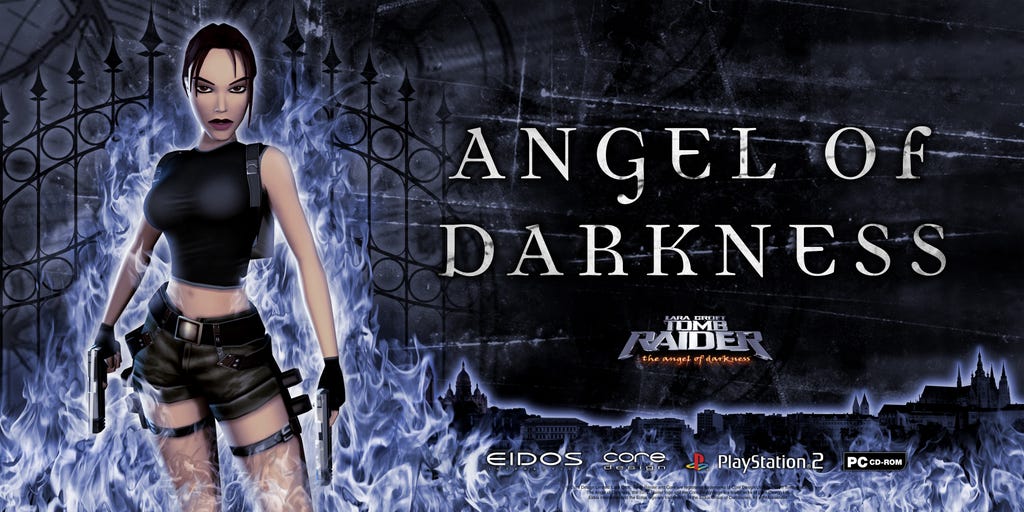 Beyond the Cover: The Angel of Darkness

Hello Tomb Raider community! Welcome again to BEYOND THE COVER. In this new issue, we’re going to discover some of the most special covers of Tomb Raider: The Angel of Darkness.

This is the most special blog for me. Tomb Raider: The Angel of Darkness was the first game I had and played in the franchise, and my favorite. I remember perfectly how my parents bought me (after much insistence) the game a few days after its launch, in the summer of 2003 when I was only five years old. Today, in the summer of 2021, I’m 23 years old and my passion for this game and Tomb Raider is stronger than ever. If my present self told my past self that I would write this blog 18 years later, he probably wouldn't believe it. I can only thank all the people who have supported me for so many years in this. Mainly to my parents, because without them, this wonderful journey would not have started the way it started. Also, to Tomb Raider and everyone involved, for allowing me to love a franchise unconditionally. And to the game, the one that saved my life when things weren't right.

Tomb Raider: The Angel of Darkness was released on June 20, 2003, for PlayStation 2 and PC only, leaving PlayStation and Dreamcast consoles to jump into the next generation. Accused of the murder of her one time mentor Werner Von Croy, Lara becomes a fugitive on the run. In an attempt to clear her name, Lara has no choice but to confront the secret alliance whose destiny it is to take over the world. With explosive action and a gripping story, Lara Croft Tomb Raider: The Angel of Darkness is a whole new gaming experience.

The best soundtrack of the franchise, one of the first RPG games with decision-making in history and, personally, the best script of the Tomb Raider saga. It had everything to be an unprecedented success and laid the foundation for many future games. With a practically open world and a first part in the city and a second part in tombs or secret complexes. However, for development reasons, the game didn’t meet the expectations of the new generation and failed to fully convince the players. To this day and almost 20 years after its launch, it’s one of the games that is highly valued by the community. Seeing an adaptation of this game today could be a complete revolution.

Time to start! Here we go with a personal selection about the most curious covers/editions of Tomb Raider: The Angel of Darkness! 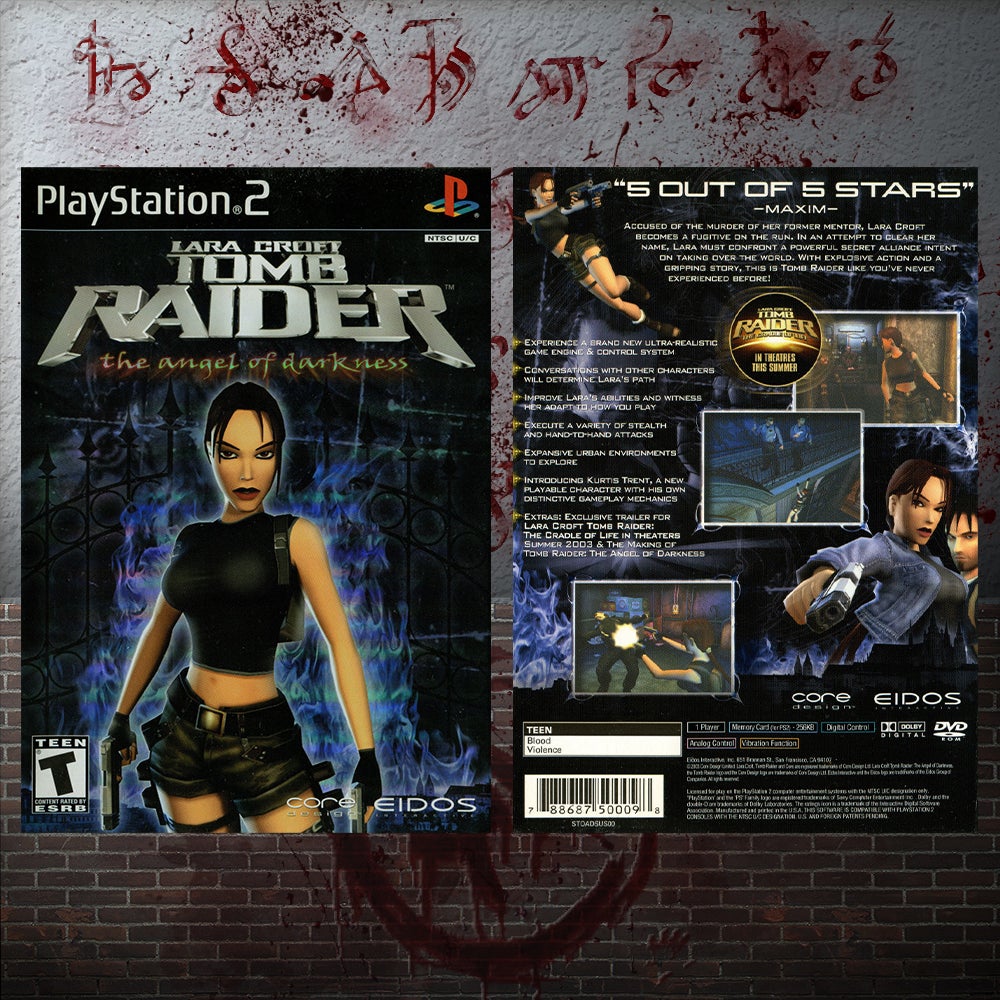 Tomb Raider: The Angel of Darkness was published in North America on June 20, 2003. The American version of the game shines. Yes, it shines! The translucent effect of the box makes the flames behind Lara Croft reflect to create an effect never seen in a game of that time.

Lara Croft in the center of the deck, in front of the doors of a large gate, with the two pistols in her hands and Paris and Prague in the background. A dark image perfect for the game, giving it a gloomy context just as the title is. The back cover shows different features of the game talking about Tomb Raider in the new generation and several in-game images, where Kurtis also appears with Lara.

On this occasion, change the entire logo, which will remain until Anniversary. Lara Croft: Tomb Raider is the new logo in a "metallic" design that gives a feeling of novelty and abandons the old style. 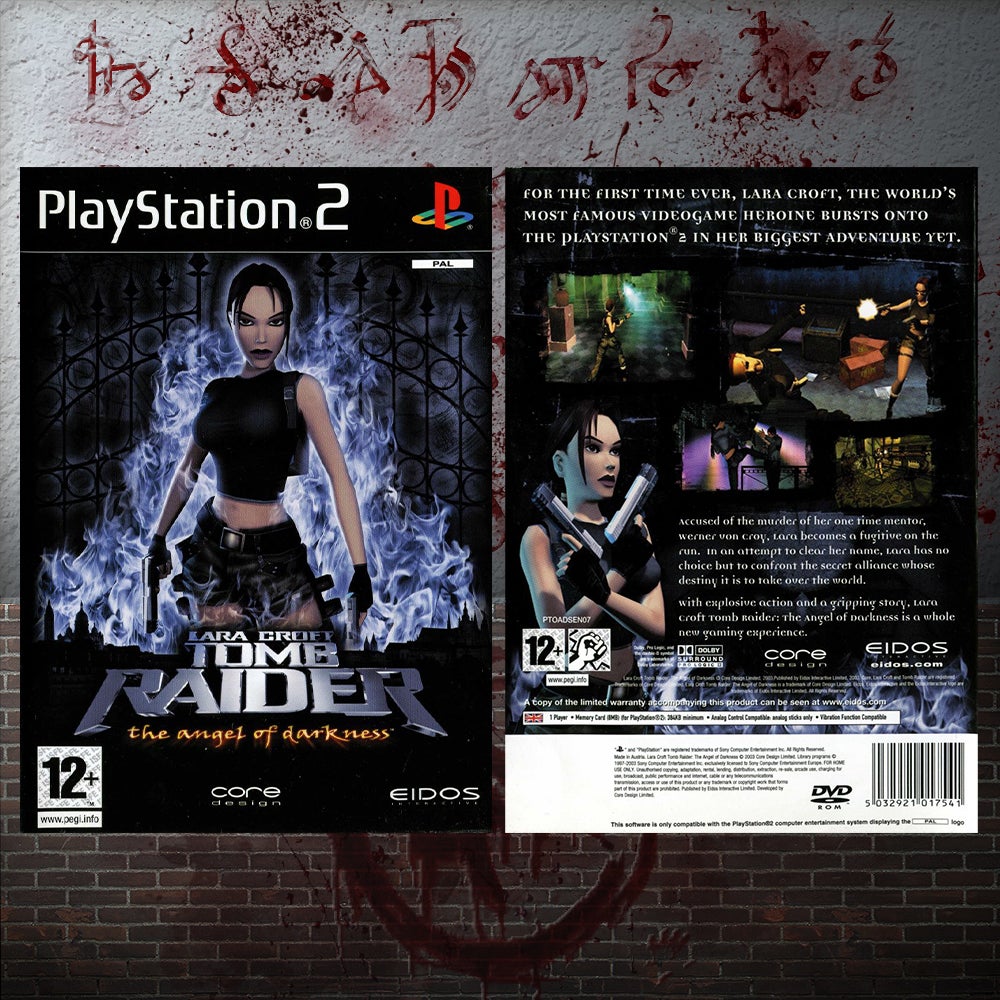 On the other hand, and although the European version of The Angel of Darkness doesn’t shine, the logo   appears below and not above. Lara's body looks fuller, and the design of the flames is somewhat different, taking up more space on the deck.

Regarding the back cover, it changes completely: both the development of the texts, the information   provided, the renders and the in-game images. Personally, all the content is better appreciated in this version and follows a darker line. 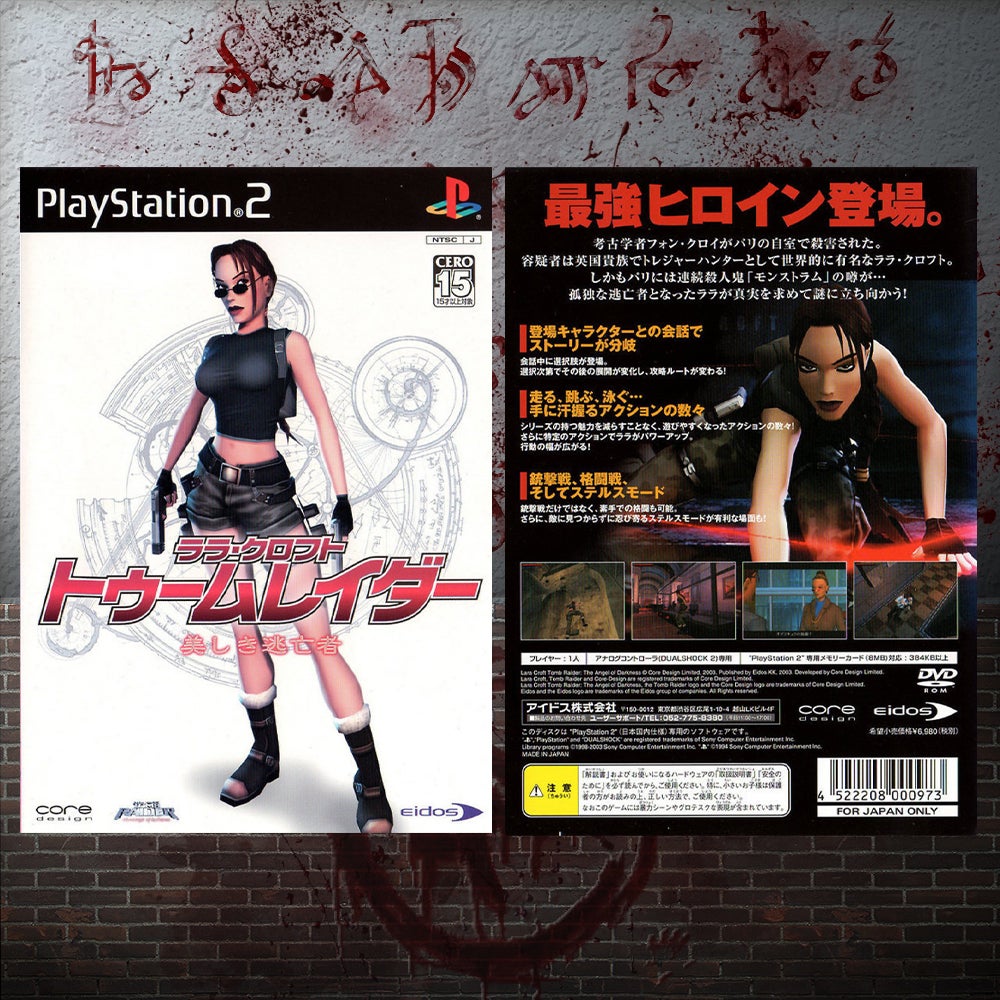 This is the best-known Japanese edition of the entire franchise: the version of The Angel of Darkness published   in Japan doesn’t have an art as different as that of the previous games, but the contrast of the white cover and the full title in Japanese are very characteristic.

In addition, in this case, the title of the game changes completely (although at the bottom of the box you   can see the logo and original title). The literal translation from Japanese is "The Pretty Fugitive." Very interesting to know this fact, perhaps to remove that halo of gloomy darkness from the game and make it more akin to Japanese culture. 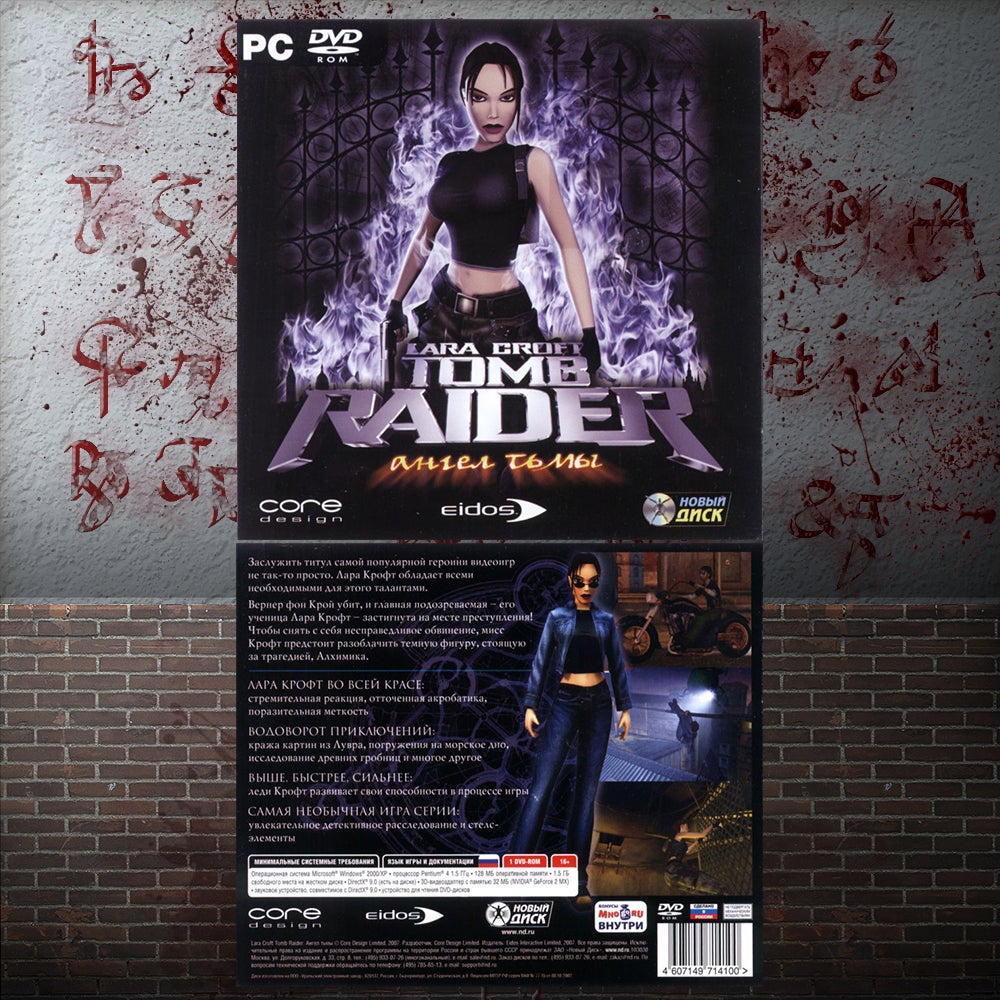 Russia surprises us again with a jewel case edition (PC): the cover image remains intact, but the game's title is adapted to Russian as in all their games, although they retain the Lara Croft: Tomb Raider in its original logo.

On the back cover the images also change. We not only see Lara Croft with the casual outfit of Paris, but also Kurtis on his motorcycle, the rooftops of the industrial zone and the sewers of Paris, all with the synopsis and characteristics of the game in Russian. 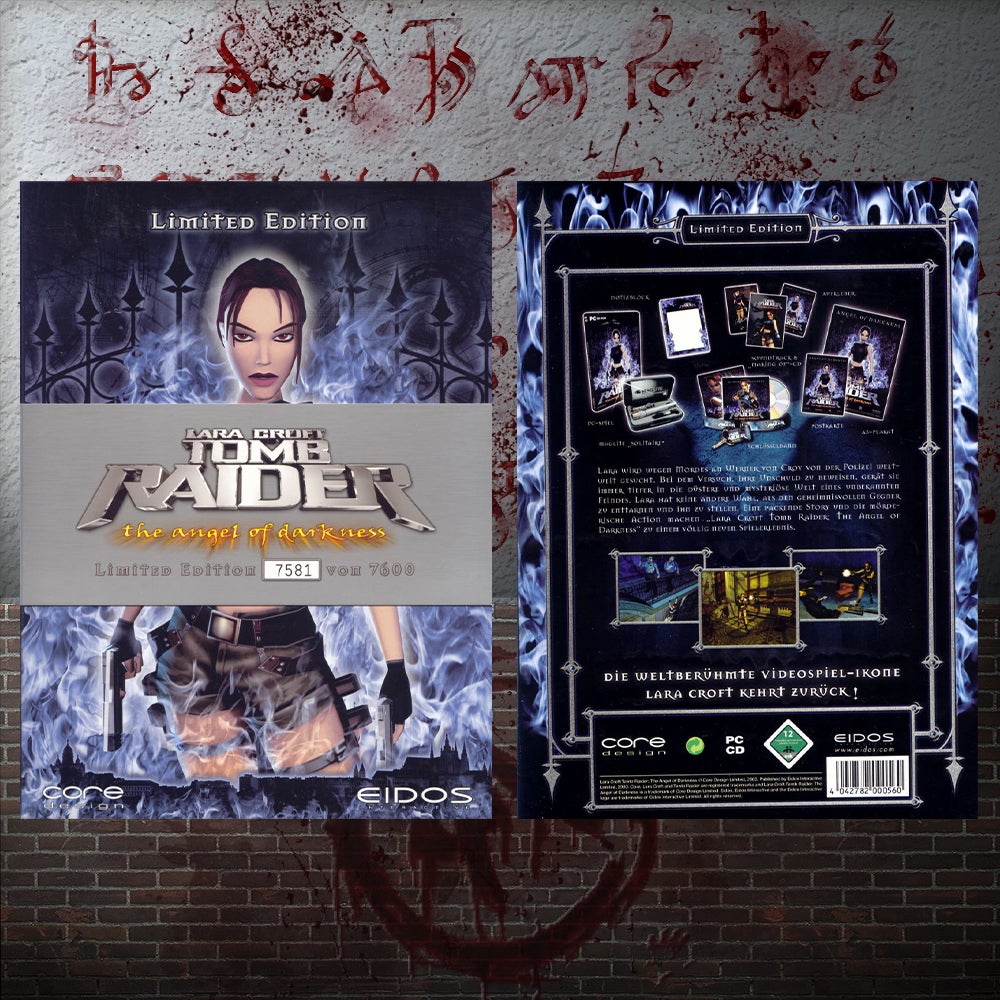 Germany released a limited edition of 7,600 units of Tomb Raider: The Angel of Darkness for PC in an impressive version presented in a numbered box and various products inside: the game, a notepad, poster, soundtrack, and unique merchandise.

To this day, this edition can still be found, but getting it unopened or with all the original items can be a difficult task or a very high price. However, it is worth having. 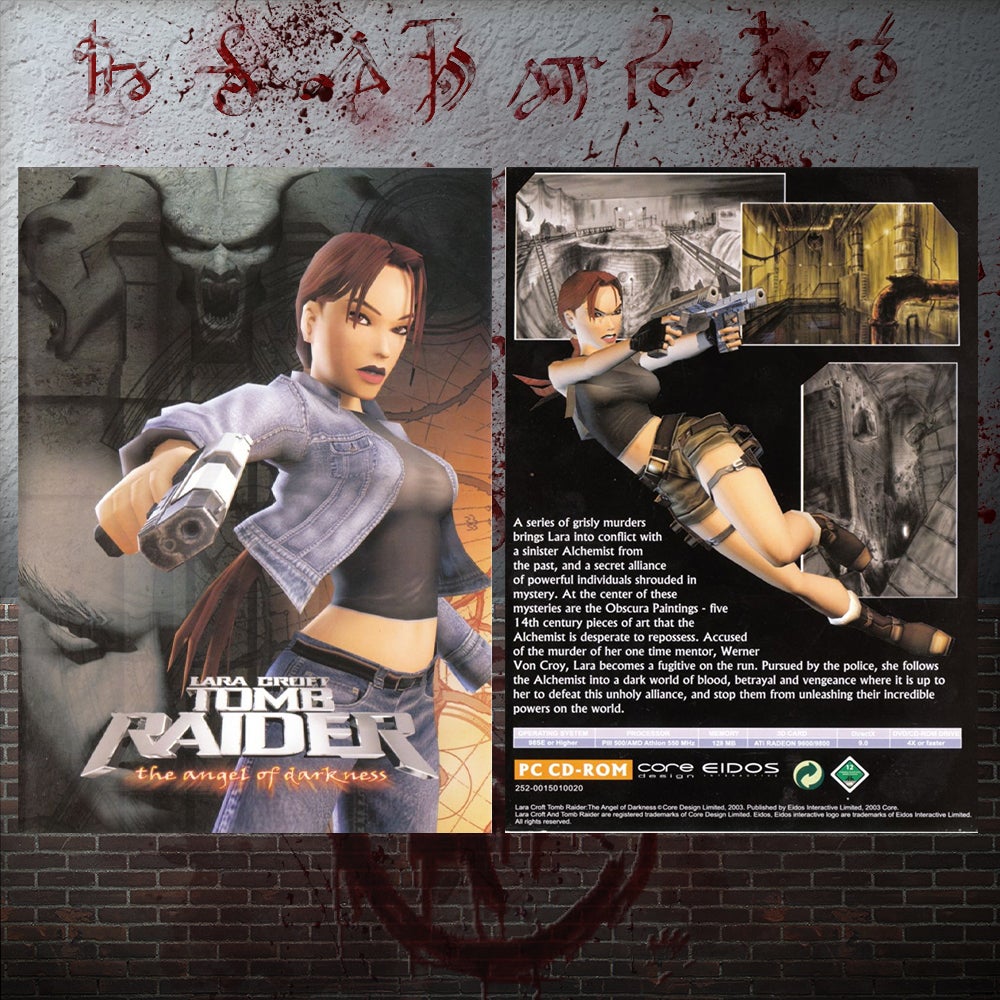 This OEM Bundled Software promotional version was given by buying graphic cards in United Kingdom and Germany. The cover shows a totally different Tomb Raider: The Angel of Darkness render and, personally, is one of the best alternative cover arts for this game.

Also, the back cover shows sketches of the game, a quiet different thing from other versions that gives this a special touch. 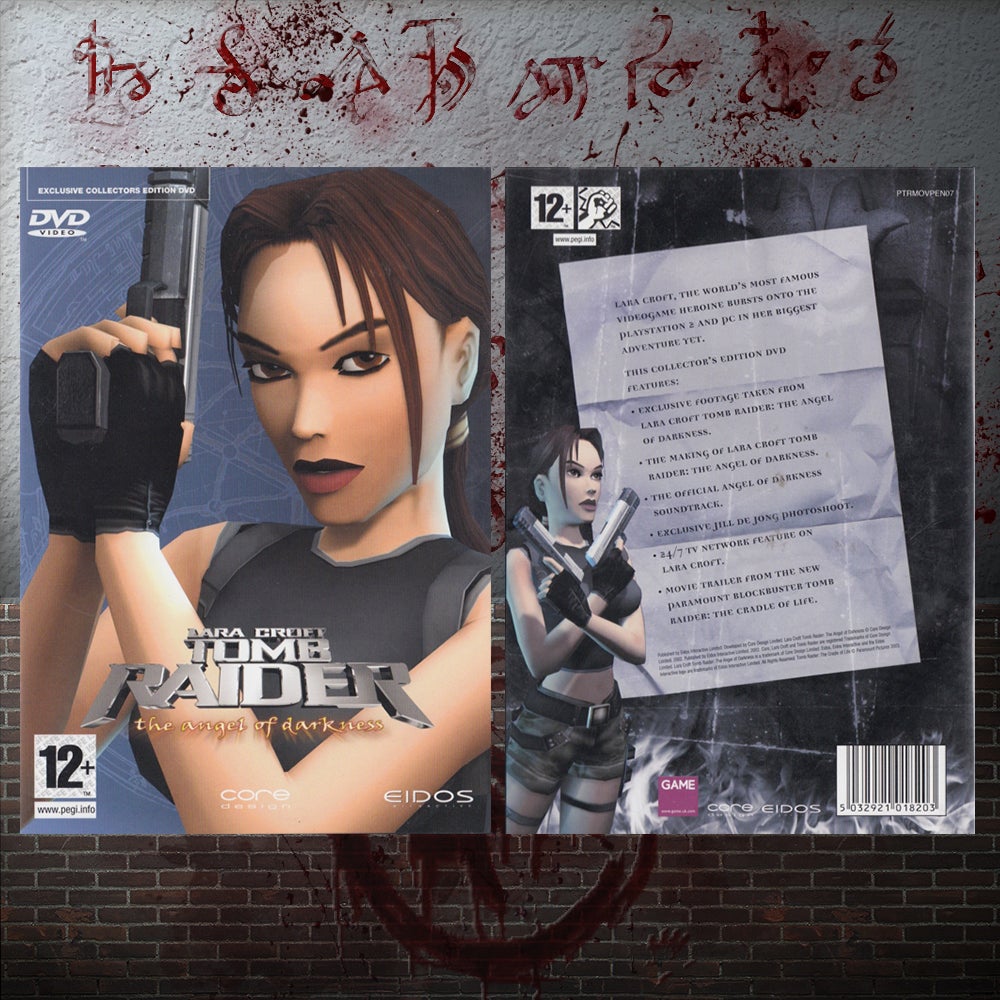 This promotional DVD of Tomb Raider: The Angel of Darkness (named Exclusive Collector’s Edition DVD) was published by Eidos in the UK. It was given to people who pre-ordered the game at GAME UK.

Lara’s pose changes from original art, with her bust in the spotlight and one pistol in hand – this is one of the most popular renders of the game. The back cover has a letter with the in-disc content. 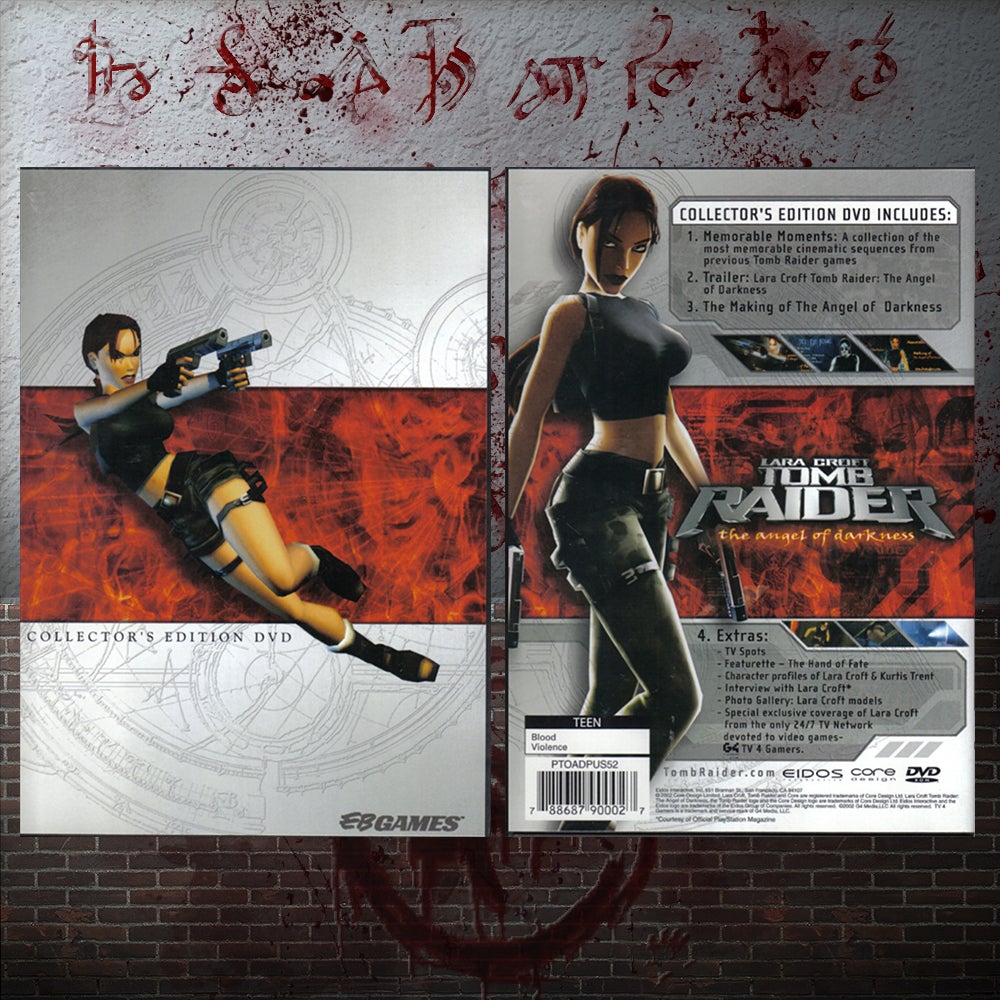 This other edition of Tomb Raider: The Angel of Darkness, also called Collector's Edition DVD and published by EB Games contains a disc with most of the extras of the previous edition but adding more content.

This version was the pre-order gift for USA. Additionally, the cover completely changes with the render of Lara Croft jumping to the side as she fires with her dual pistols in a better-designed collector's edition. 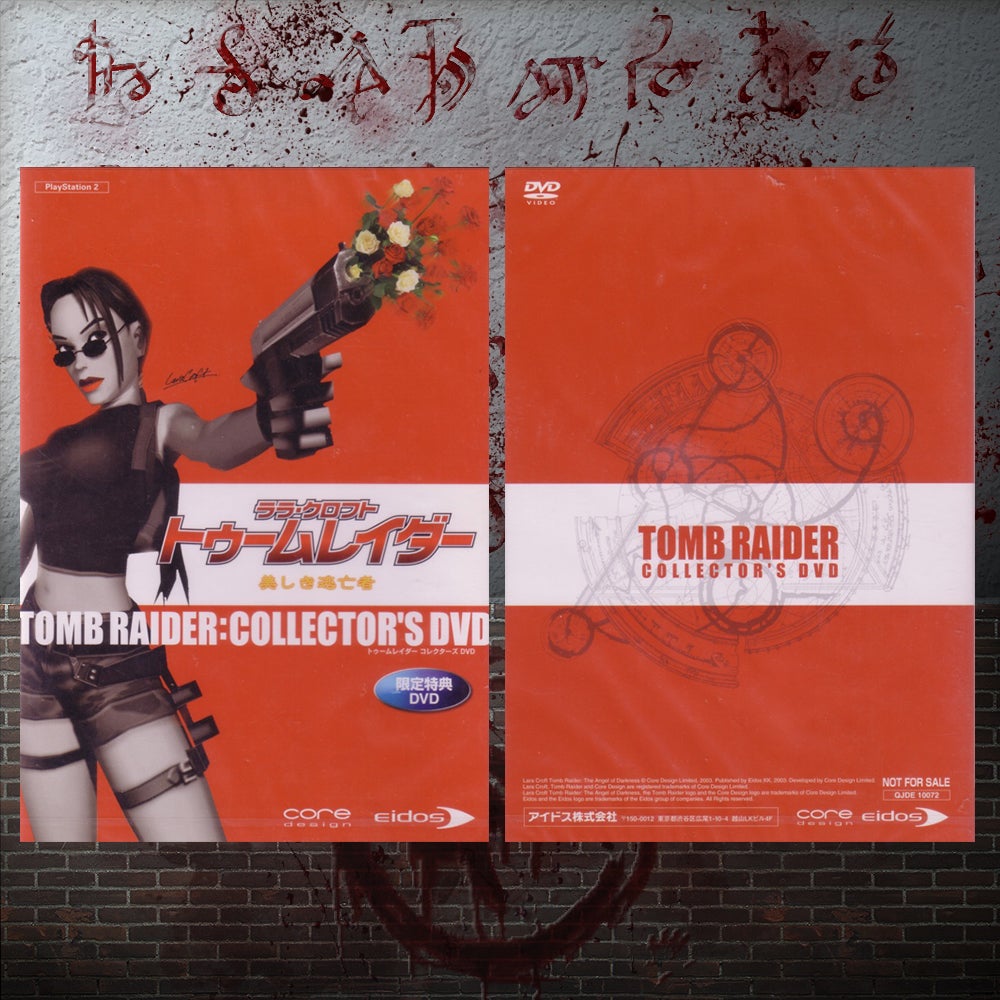 And the last! The same edition as the previous ones, with the same or similar content, but the version published in Japan as a gift for reserving the game.

This well-known render is undoubtedly one of the most iconic images in the game with Lara Croft shooting flowers. Japan has never ceased to amaze us with the images it has dedicated to the covers of the Tomb Raider games. 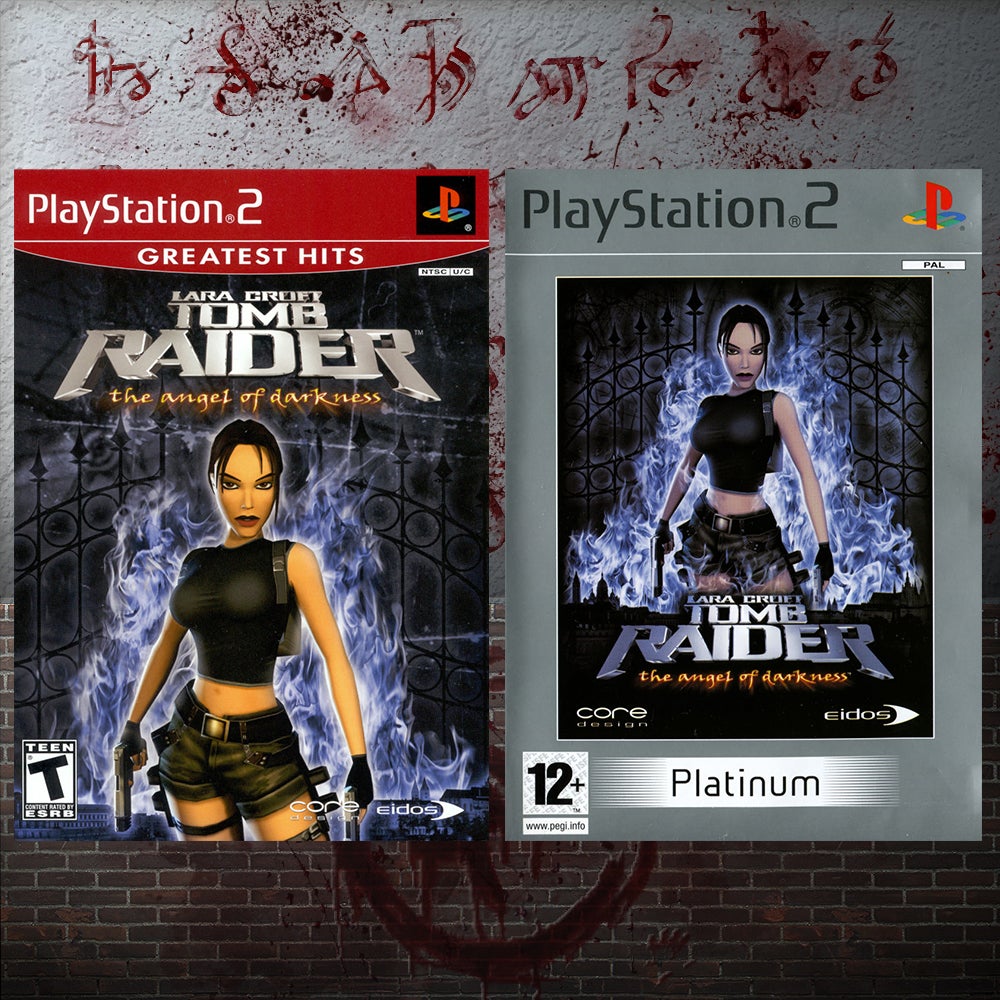 The first Greatest Hits/Platinum Tomb Raider game was The Angel of Darkness. To get this edition, it was necessary to sell 400,000 copies in its first year on the market.

Although the international sales of the game were, unfortunately, not very high compared to other titles, it did achieve this feat, becoming one of the first games on the console to obtain this important edition. 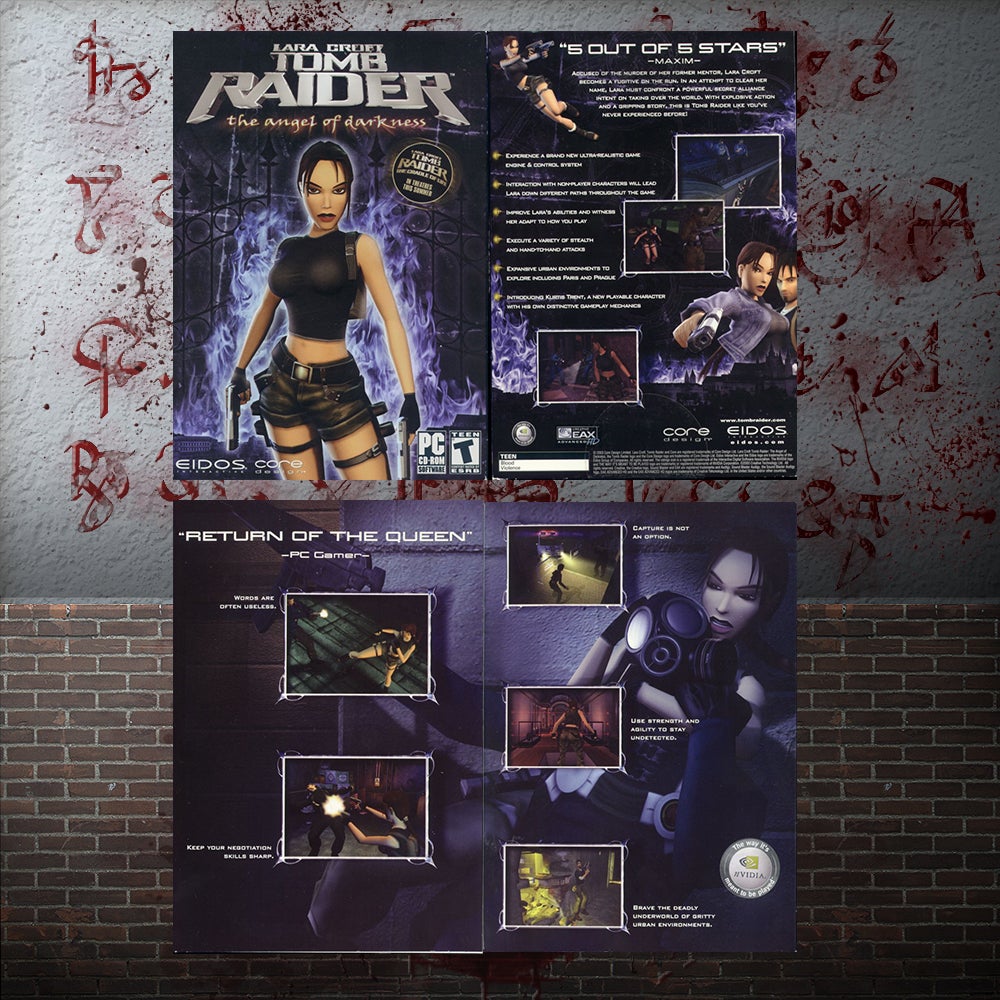 Tomb Raider ditched trapezoid boxes with Tomb Raider: Chronicles, but a new square box design was kept for Tomb Raider: The Angel of Darkness with very aesthetic design and arts for PC.

Here we can see a double design when opening the box in which the return of the queen (Lara Croft) is praised and some of the characteristics of the new game are discussed, such as the gameplay, the mechanics, and the upgraded game engine. 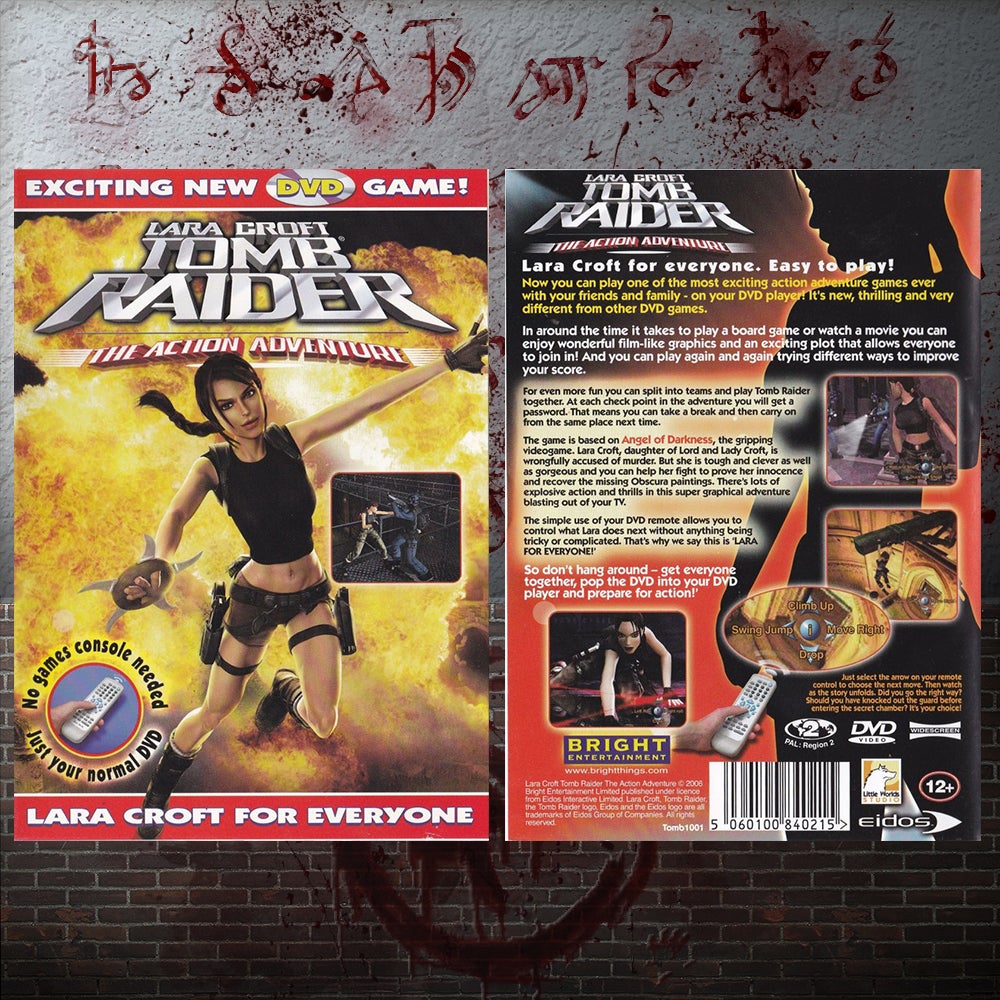 BONUS! Tomb Raider: The Action Adventure was an adaptation of Tomb Raider: The Angel of Darkness for televisions (DVD), available to control through the controller itself. A revolutionary and very attractive idea that allowed everyone to play without the need for a console.

Of course, the gameplay and mechanics change, but it’s a nice (and very fast) way to complete the game without too many difficulties and by levels accessible through codes.

Being so small, I didn’t know that this game was going to be part of a trilogy (finally discarded) until later. That’s why, for me, the ending of this game is simple: Lara is guided by the Churigai to exit the complex under the Strahov. Kurtis helps her out of there, regardless of whether he survives or not. This game has a beautiful ending, but you must know how to read it. And interpret it as each one wants. Without a doubt, it was a farewell before a new era.

Thanks for reading my very best and special blog of Beyond the Cover series!

Hope you enjoyed my personal selection for Tomb Raider: The Angel of Darkness covers, but I aim you to discover more and new ones. I’m Alejandro Cambronero Albaladejo and you can follow my path on Alex’s Tomb Raider Blog or Tomb Raider World and my social media (Twitter, Instagram and Facebook). Stay tuned for next blog with Tomb Raider: Legend (2006). See you and keep exploring!