Beyond the Cover: Chronicles

Hello Tomb Raider community! Welcome again to BEYOND THE COVER. In this new issue, we’re going to discover some of the most special covers of Tomb Raider: Chronicles.

In this blog, and to break a bit the versions that we have already seen (collections) in other previous blogs, I have chosen those that are unique without forgetting the most special ones. It is not the game with the most different versions. It’s one of the installments with fewer variants, but the ones it does have are very interesting.

Tomb Raider: Chronicles, released on November 24, 2000. Lara Croft's death marked this game. But she wasn't dead, she was just taking a break from being such a queen. Friends of the archaeologist meet at her mansion after her funeral to recall her most outstanding chronicles of her in a truly varied title. A very interesting proposal while we waited for the new generation (at that time) and the jump to PlayStation 2. This game was a good previous title while the Angel of Darkness was being developed, thanks to which we were part of some stories and adventures of Lara Croft from young to becoming the Tomb Raider that she was destined to be.

Time to start! Here we go with a personal selection about the most curious covers/editions of Tomb Raider: Chronicles! 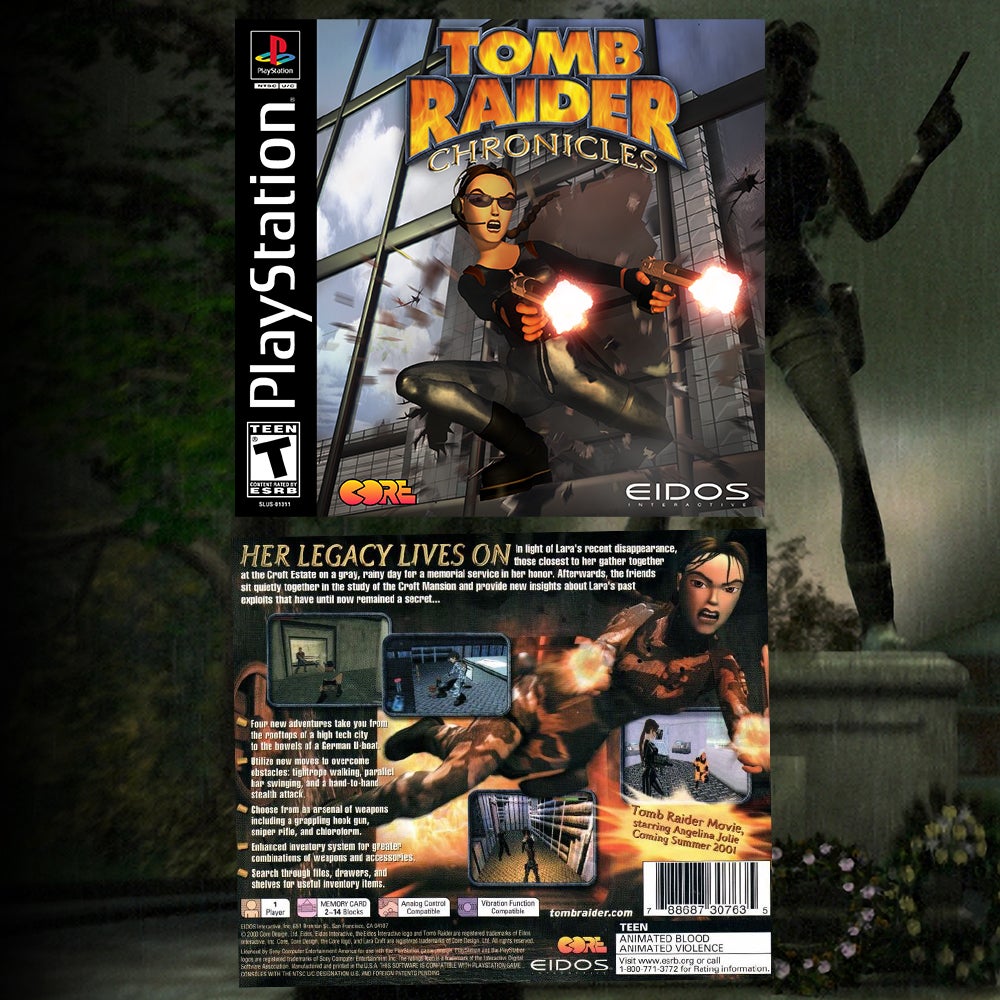 Tomb Raider: Chronicles was published in North America on   November 24, 2000. In this time, we have the most different covers between NA and EU versions, especially due to the setting of the game. In the North   American version, Lara Croft is shown jumping from the top floor of the VCI; an epic scene based on the last level of the game.

While the cover art is exceptional worthy of any action blockbuster, it only references one of the   various levels in the game, although certainly the one that could be   considered the most important of all. Of course, Lara's latex suit deserves great recognition, who hasn't wanted one like it?

Regarding the logo, it also changes slightly. Totally focused on the image, with a relief effect and a   colorful interior with a texture like flames, it carries "Chronicles" with a font also curved with a very... stylish touch. 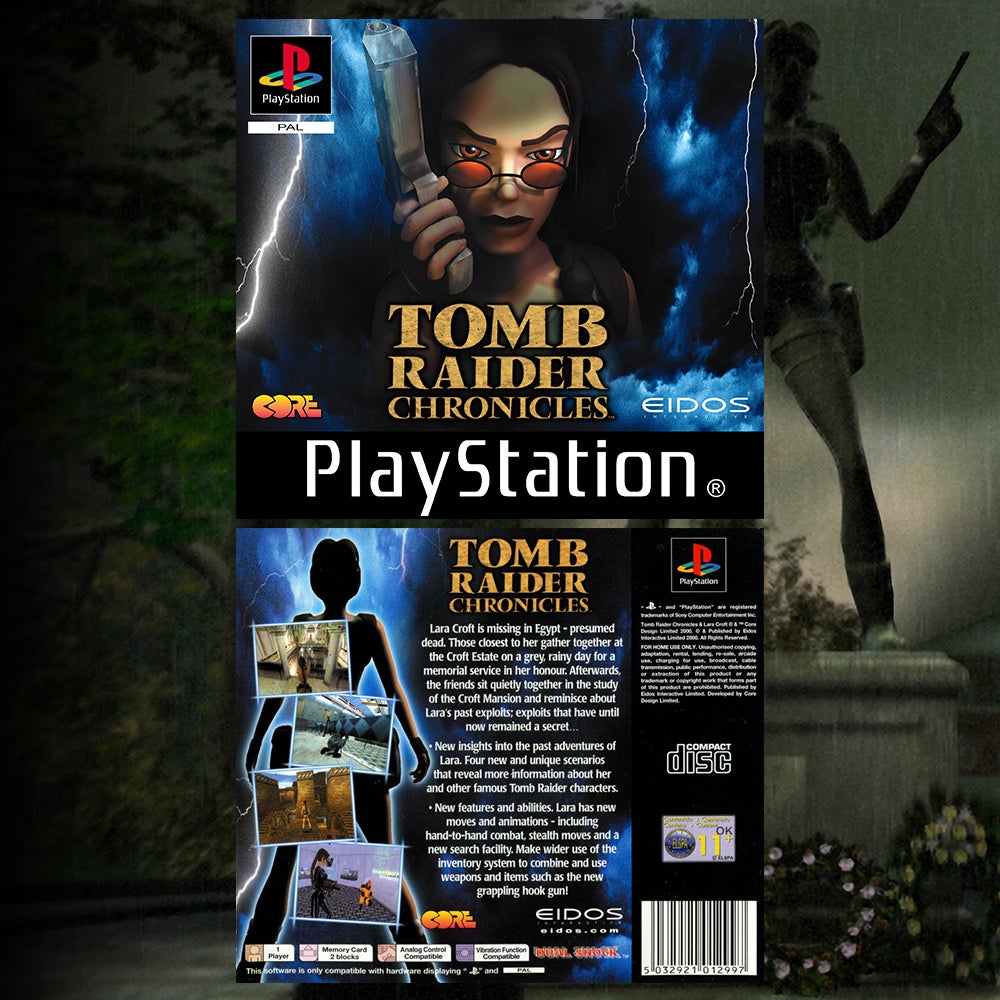 Tomb Raider: Chronicles does the opposite on its European cover. In   this case, the gloomy tone of the image largely matches the sadness after the  "loss" of Lara in Egypt. A close-up solely and exclusively to show   Lara Croft, with a gun in hand and her characteristic glasses in the middle of the storm.

To be honest, it's a Lara Croft obituary tribute cover, emerging from darkness... a clear step to the next title in the franchise, even if the two don't have much in common.

For this game, entire logo maintains European patron centered in the cover (as the NA version), which is   designed with the same texture, typography, and linearity. 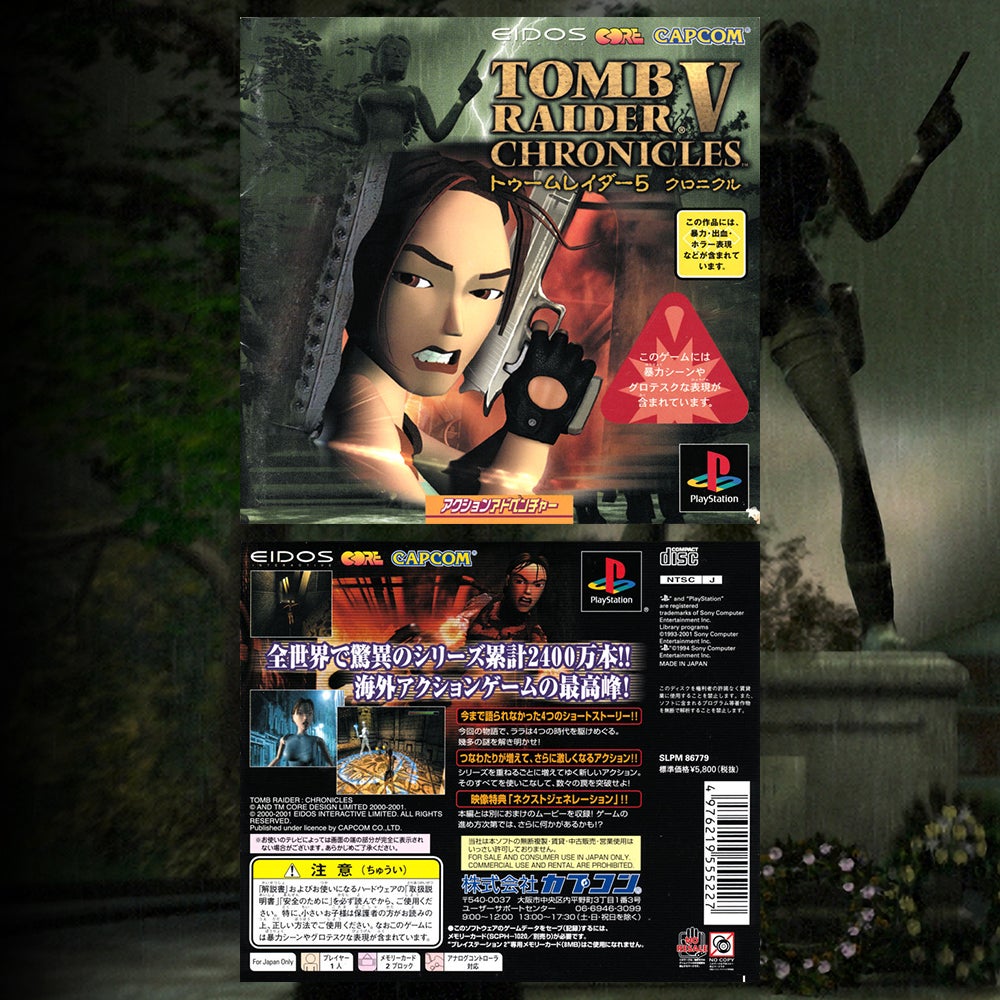 Japanese versions always   pleasantly surprise us. Another case is that of Tomb Raider: Chronicles, with a montage that shows Lara Croft taking cover in the submarine and in the background the funeral of the archaeologist with the statue that is erected in the Croft Mansion after her supposed death.

However (SPOILER ALERT!), the covers of Japan are no longer so special and unique after this game. Although   we will continue talking about them in future blogs because they have very   curious details, one of the greatest pleasures of the blogs that have been published to date has been talking about these magnificent covers and being able to discover them to those who did not know them. It is also distributed by  Capcom! 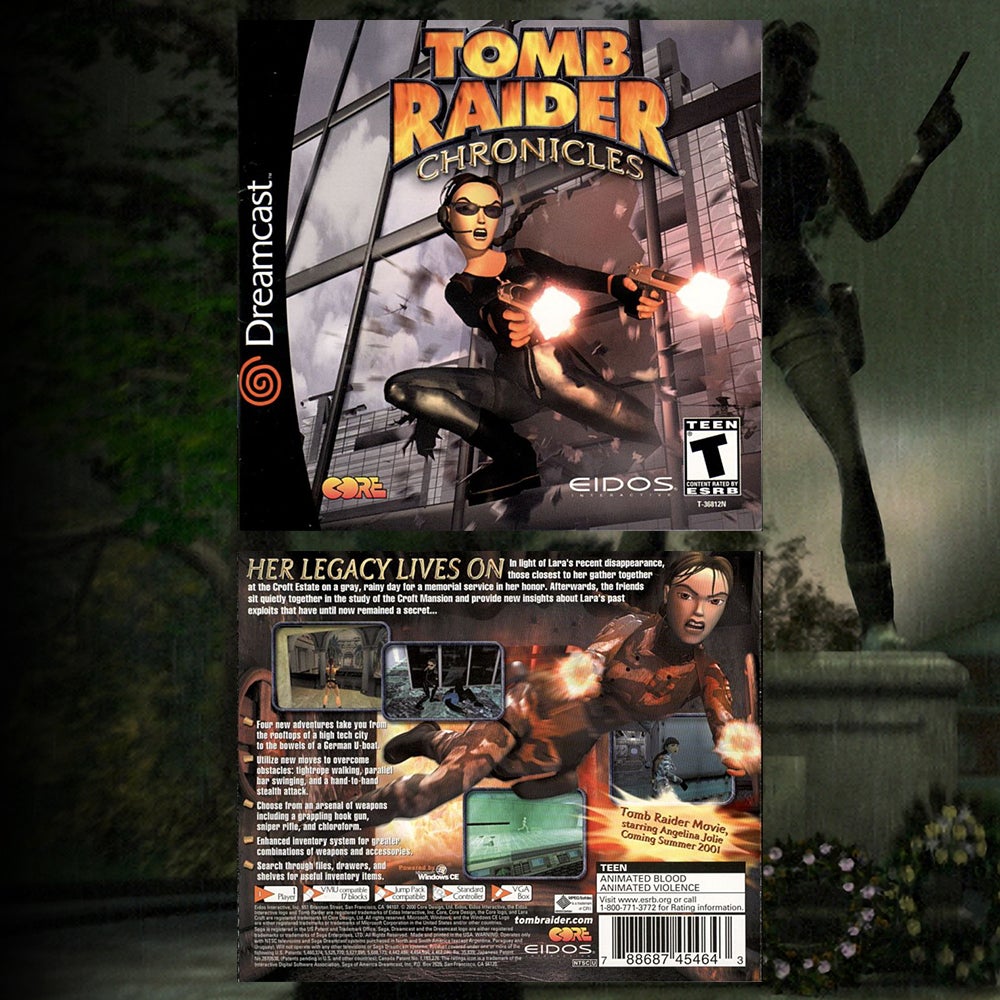 As Dreamcast covers for this   game as the same as PlayStation ones, let's talk about back cover details.   Did you see? The major thing is there are a promotional text of the first Tomb Raider Movie, starring Angelina Jolie, scheduled Summer 2001! In fact, this month was the 20th anniversary of the movie, time flies.

In the image, Lara jumps sideways inside the Russian submarine, being one of the best-known renders of   the game and one of the most iconic parts of Tomb Raider: Chronicles, with different bullet points about the characteristics of the latest game for PlayStation and Dreamcast. 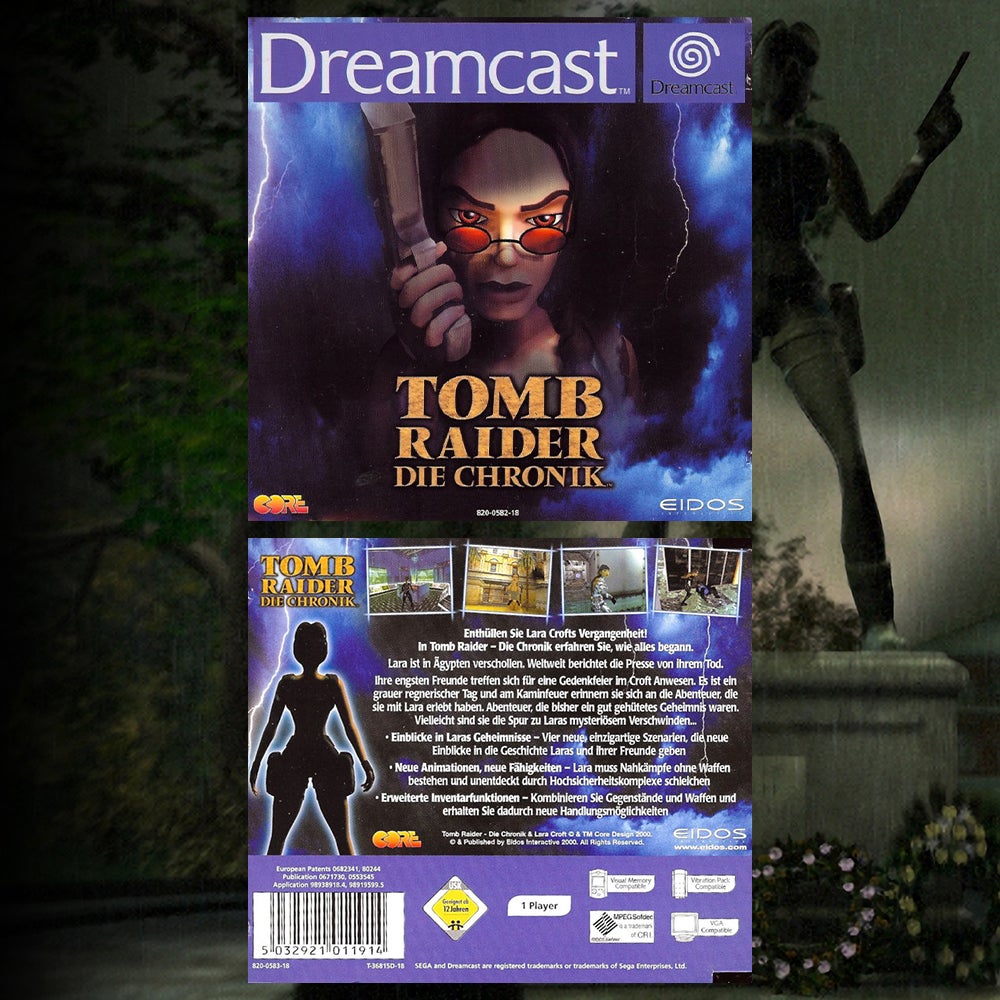 On this occasion, I have decided to represent the German version of Tomb Raider: Chronicles for   the Dreamcast to show that, in some countries, the subtitle of the game changed to localize it in the corresponding country. There were not many cases in Europe, but this is the most representative.

The back cover maintains the same tone as the cover, but with Lara Croft standing, showing only her   shadowed outline. It is true that it’s a not very detailed image, but that   says enough to give that dark touch to the stories of Lara Croft told by those closest to her. 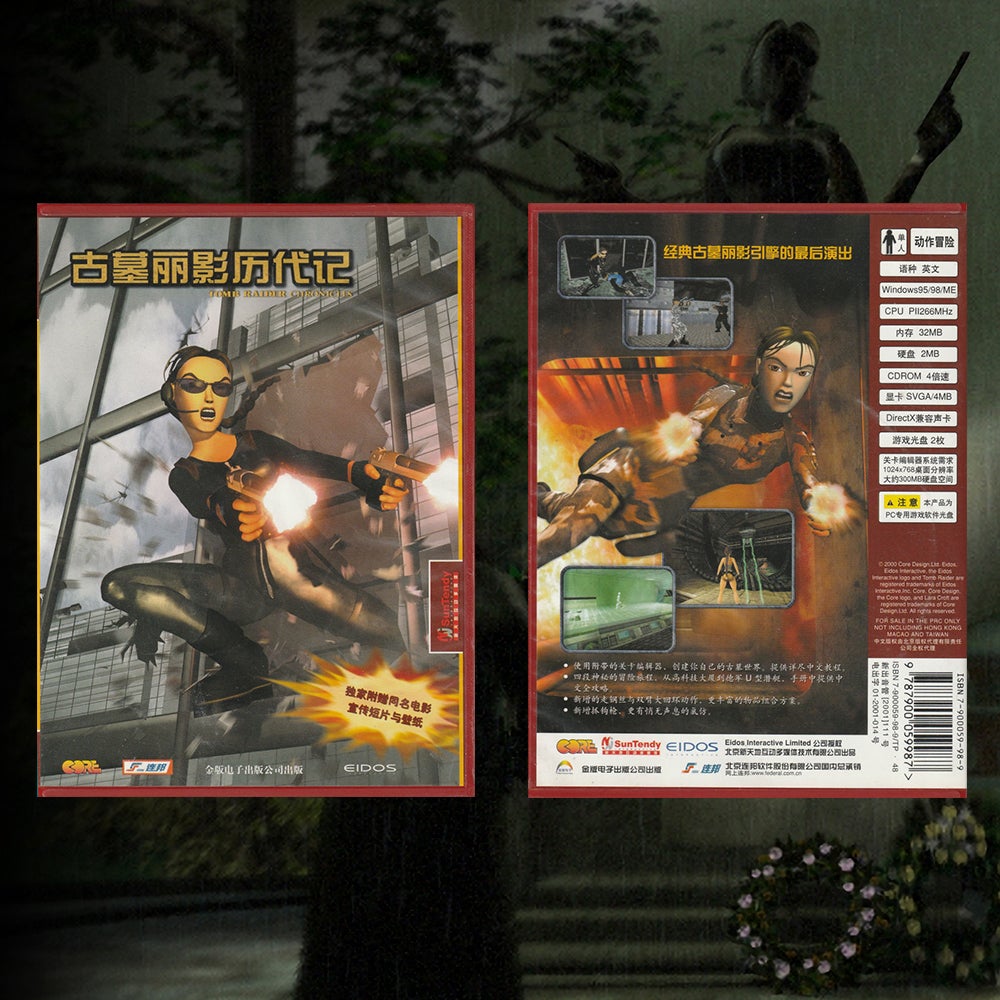 Surprise from China! This edition of Tomb Raider: Chronicles in red DVD format is an absolute   beauty and a very rare version to find. It is so aesthetic to see cover and back cover with Lara Croft in some renderings (as we have already mentioned before) so beautiful.

The logo, on the other hand, maintains the Europa font with the English subtitle Chronicles. It doesn't have much more detail, allowing you to see the art design completely and without distractions. It was distributed by SunTendy, which we already know   from previous occasions. 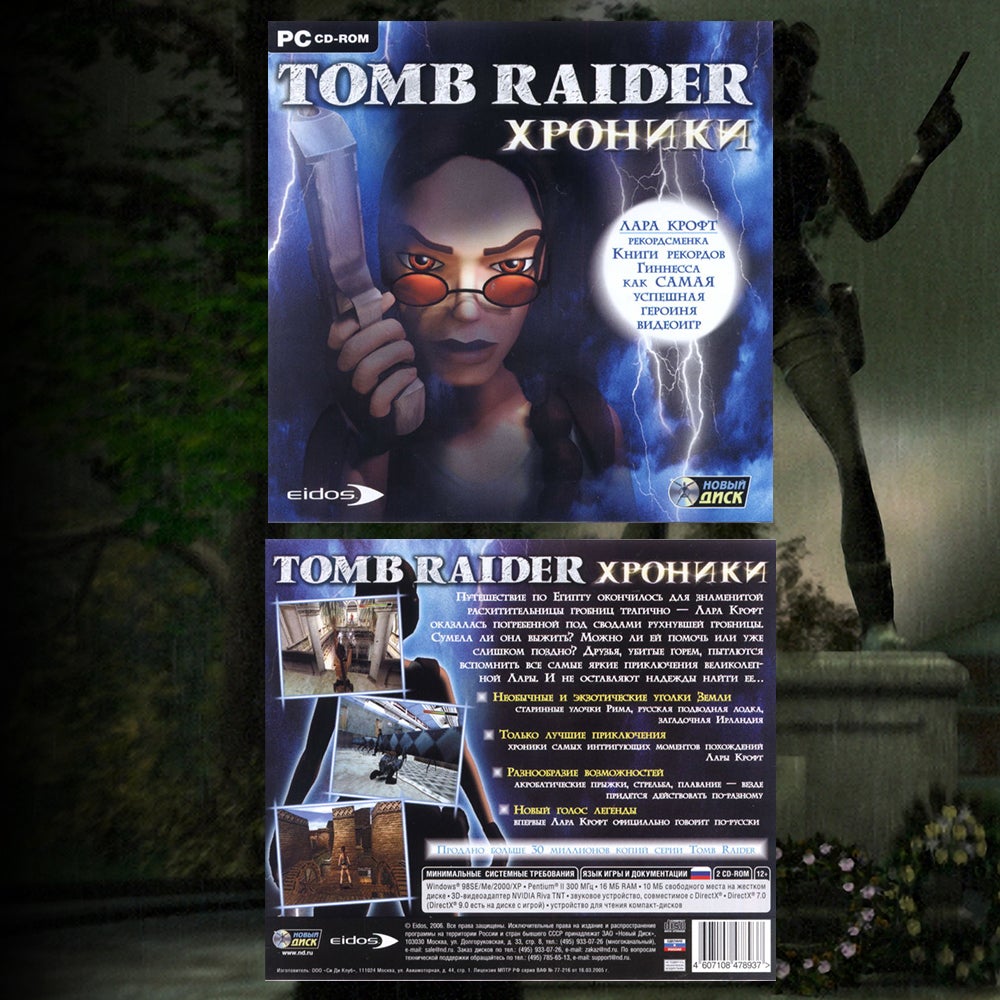 In the previous blog we discovered the first Russian edition of Tomb Raider, so here we have our own Tomb   Raider: Chronicles.

With the European design, practically everything else changes: from the logo, which could perfectly be that of (* cough, cough *) a new Tomb Raider after unifying the timelines, to   the positioning of the texts. You can imagine? I do. 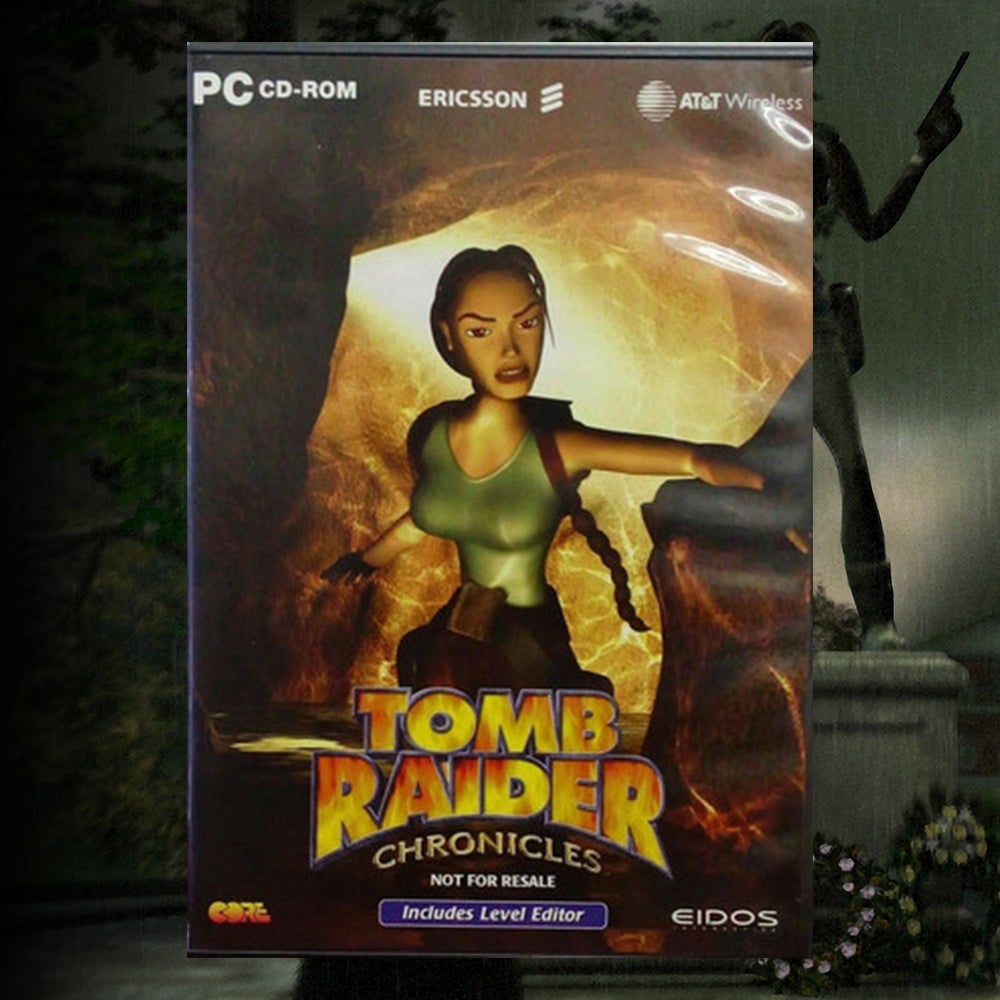 Ericsson published two  promotional versions of Tomb Raider: Chronicles. The one that can be seen in the image is the rarest, with a cover image totally different from any other.

This PC version also includes the Level Editor, and had a smaller square cardboard box inside with the European art of the game. 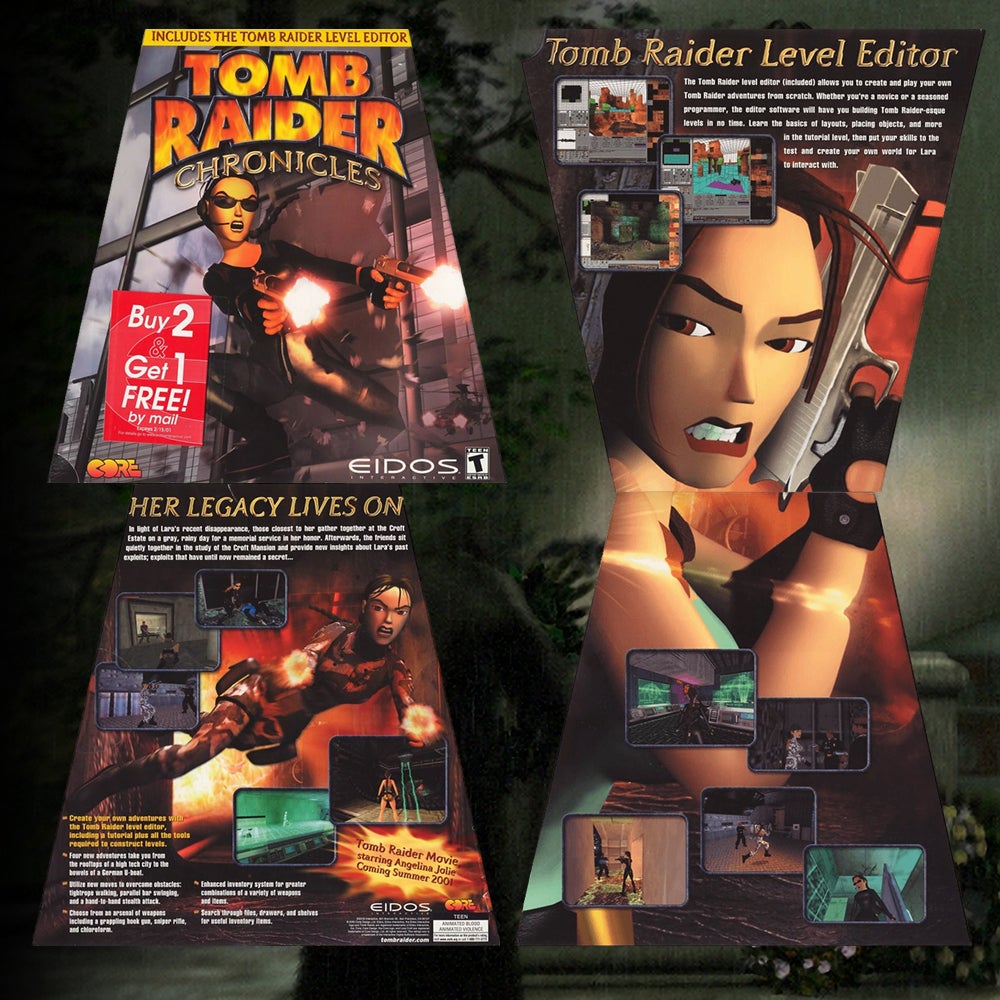 To close this blog, I want to   give a special mention to the latest keystone edition of Tomb Raider. Tomb   Raider: Chronicles was the last game in the franchise to have a version   of this type, so well-known and valued. As the slogan says, Lara Croft's   legacy will always be alive, in any of its versions.

Who knows? Maybe we have a   similar edition in the future... to commemorate these first five games. I'm   sure it would be a great success for a future special edition.