The month of May has arrived and with it a new installment of our Treasure Hunters' section, where we analyze the most unknown and rare merchandising of Tomb Raider. I am very happy to be able to count on your visit and your time to read these lines. If last month you missed our installment on "Tomb Raider III Adventures of Lara Croft" (1998) take a look to discover the context in which we currently find ourselves to analyze the next game. Let's not waste any more time and travel to Egypt with Tomb Raider IV.

With the fourth installment of the license, "Tomb Raider IV: The Last Revelation" came to the public´s hands in 1999, a game that after the successful trilogy of Lara Croft's adventures tries to return to the origins, where it all began, in this case Egypt and therefore make many fans happy that even today, consider this video game the true essence of Tomb Raider.

As this was the fourth game in which the Core Design´s team had worked without much rest for several consecutive years, the accumulated fatigue began to be noticed more palpably. The sum of intense work rhythms with a relatively small group of creators and developers caused them to request, once again, to have more time to dedicate carefully to their works. The Core team was clear from before developing the game that "The Last Revelation" would conclude with the apparent death of Lara Croft due to the collapse of the pyramid she was exploring, they even thought about the idea of ​​beheading her, but that was too much, due to the fact that a large part of the team members were very burned with the fast pace of production to which they were subjected to comply with the annual releases. With this main idea, the interests of Andy Sandham (writer of the game) and the rest of the team collided with those of Jeremy Heath-Smith (CEO). Heath-Smith logically refused that this was the end of Lara Croft although he agreed to give the game a dramatic and tense ending in order to be able to result in the subsequent delivery and to keep the audience in tension until then.

Lara Croft's adventures could not end, Lara had made Core Design and Eidos Interactive the fastest growing stock on the NASDAQ (National Association of Securities Dealers Automated Quotation) stock market and therefore was the "medium size" company with the fastest growing in the world. The stock went from 9 to 109 in less than a year. Lara was the company's lucky charm and they wouldn't part with the star from her so easily.

Finally on November 19th, 1999 "Tomb Raider IV: The Last Revelation" goes on sale in Europe and in the United States on December 6th with 35 new levels that were developed mostly in different locations in Egypt and reaching 5 million units sold and the highest sales positions in the UK, which although slightly lower than previous installments, the franchise was still highly profitable.

Merchandising and commercial agreements helped the company financially in addition to continuing to make Lara Croft known around the world. In 1999, a wide variety of derivative products such as towels, curtains, toothbrushes, deodorants and even designer fountain pens from the Waterman brand were available.

We take a look at some of these Tomb Raider IV merchandise gems below. 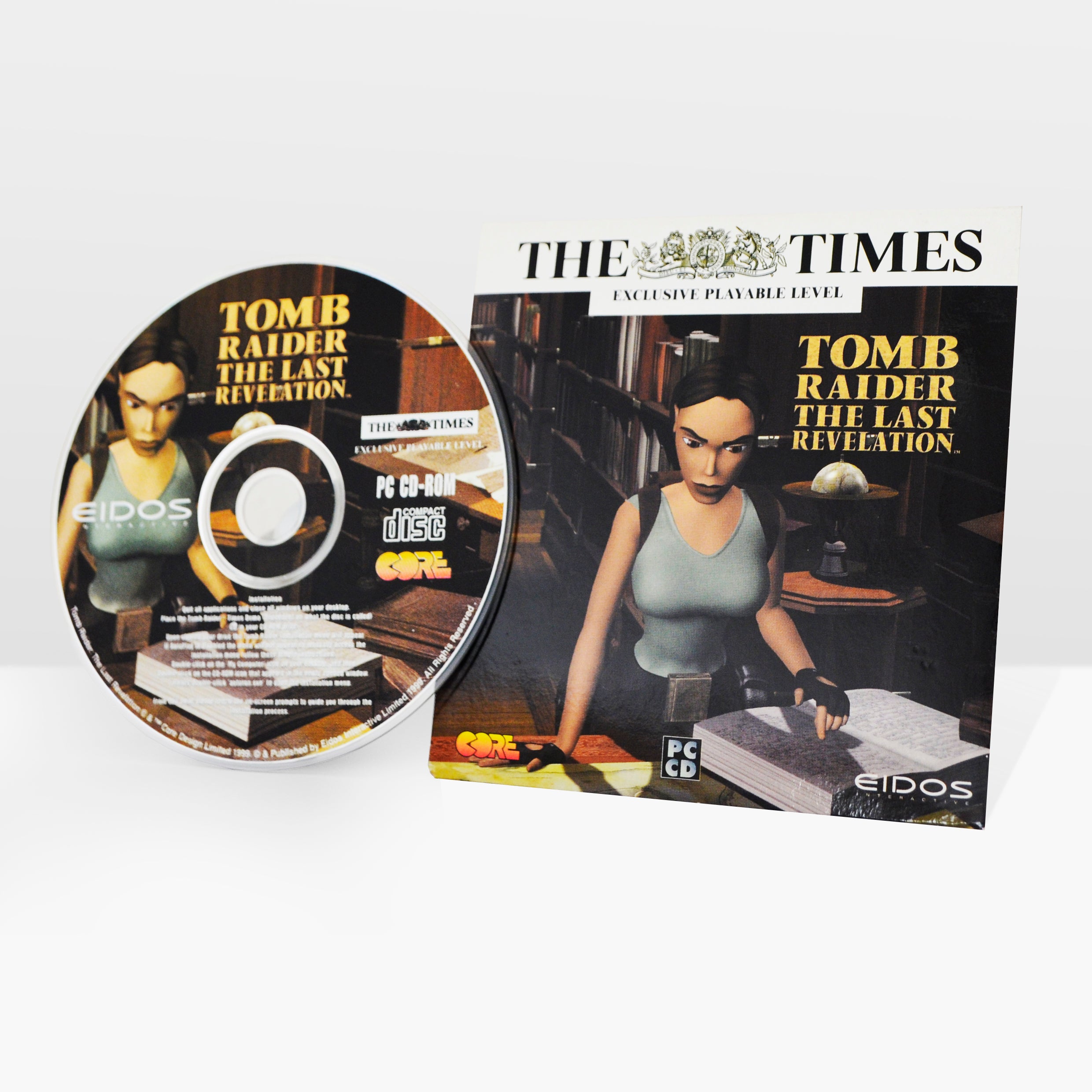 Physical edition for PC of the exclusive level of “Tomb Raider: The Times”. This extremely rare version was gifted with The Times newspaper in a very limited edition on November 4, 1999 in celebration of the 77th anniversary of the discovery of Tutankhamun's tomb in Egypt by Howard Carter. Eidos Interactive and the British newspaper The Times reached a mutual collaboration agreement, on the one hand, the newspaper wanted to celebrate in a special way the anniversary of the discovery of Tutankhamun's tomb with its readers, and for its part, Eidos wanted to be able to offer a playable demonstration of the graphic potential of the new game "Tomb Raider IV The Last Revelation" (1999), therefore, this additional level was developed that is not part of the original game but that served as an advertising element to test Tomb Raider 4 and get new sales facing Christmas of that same year.

The story of this additional level tells how in 1999, an excavation reveals a new network of tunnels in the tomb of the mythical pharaoh Tutankhamun. Peter Stothard, editor of the prestigious newspaper The Times, summons Lara Croft into his office to tell her about it and ask her to explore the new tunnels.

Lara accepts and after avoiding a multitude of traps and dangers, she finds the Golden Mask of Tutankhamun. 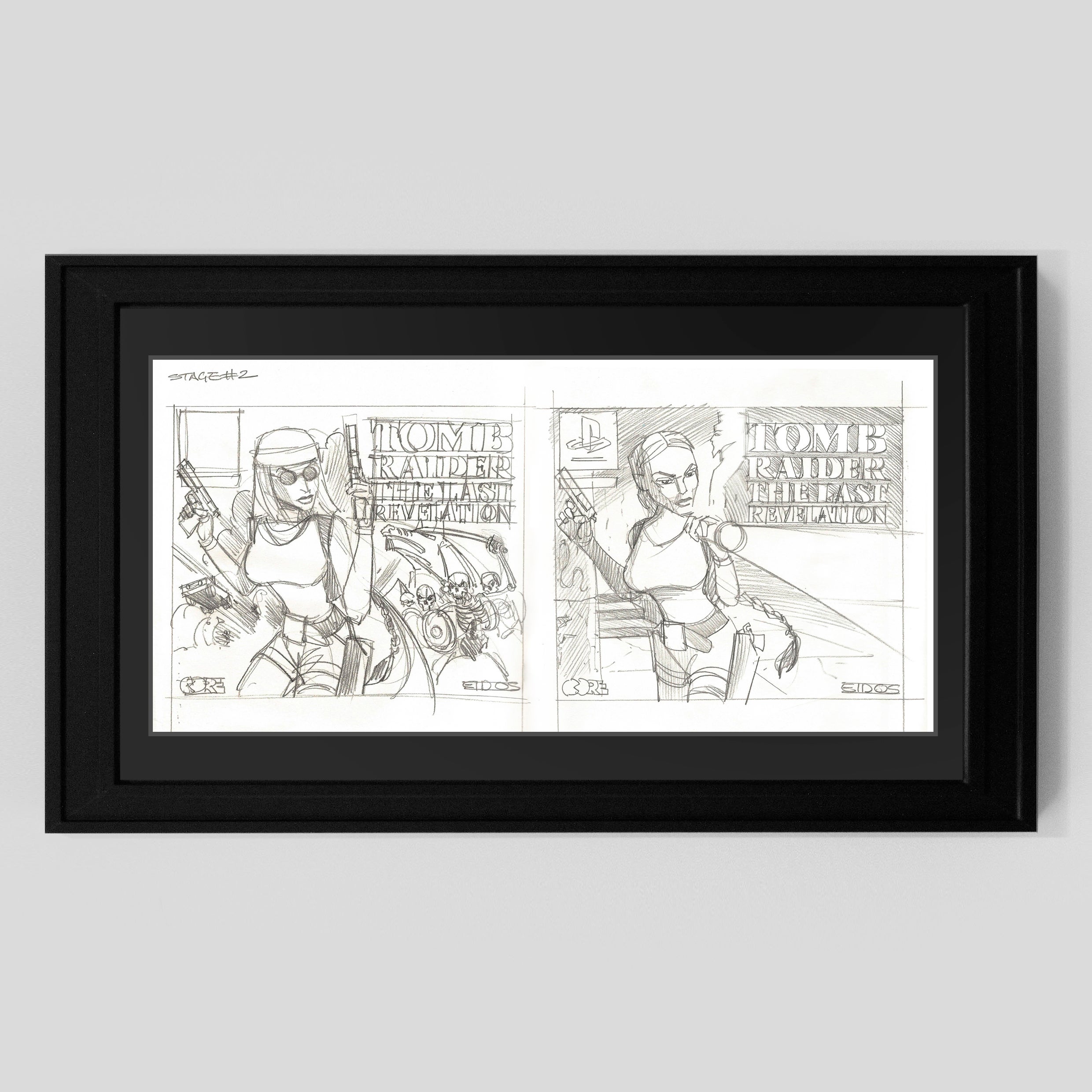 Original sketches by the British artist Steve Beaumont for Eidos Interactive featuring the cover design for Tomb Raider 4. Two cover alternatives were featured; one of them featured Lara Croft wearing a hijab as she was chased by an army of skeletons and a re-enactment of a jump with her off-road vehicle in the lower left of the image. The second cover alternative, much more sober, is of Lara Croft entering a mysterious tomb with a flashlight. Finally, the sober version of Lara with the flashlight was chosen (the one we all know today), the first option was discarded because the hijab did not make Lara Croft totally   recognizable as she had a semi-hidden face and a certain iconicity was sought   in the design. It is fortunate that this decisive piece of franchise history is still preserved today. 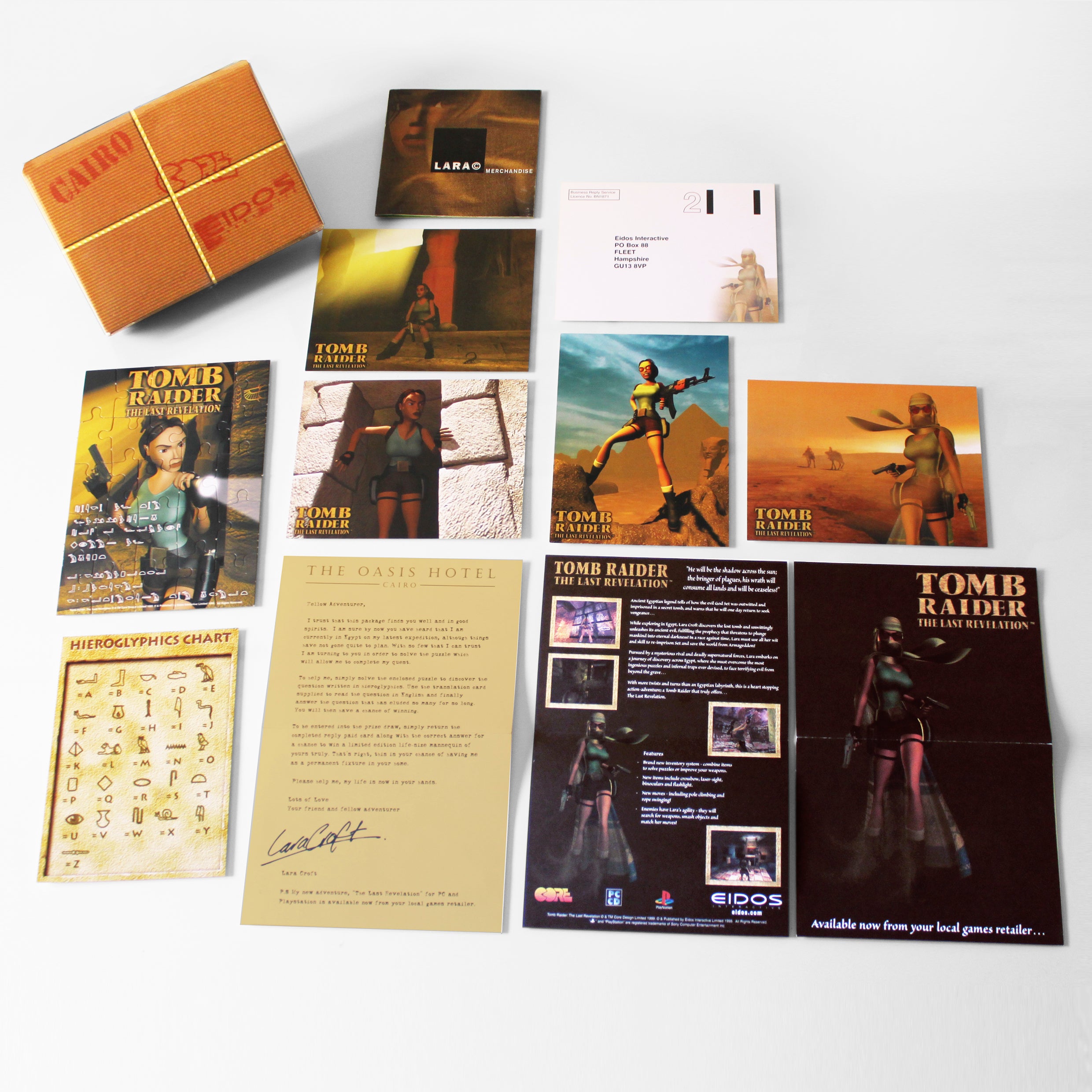 British press kit sent to video game distributors, press and specialist personnel in the video game industry. Through this package decorated with postmark from Cairo, Core Design and Eidos Interactive, Lara Croft herself wrote to the recipient of the letter to request help to decipher some hieroglyphs hidden in a puzzle. If you discovered the solution that Lara was asking you, you entered the draw for a life-size statue of Lara Croft (which I will describe in the next image of   this article). In addition to the letter, the puzzle and the list of the hieroglyphs, Lara sent you 4 postcards of her adventures in Egypt, a merchandising catalog of her brand "LARA ©" and a small poster with information and technical characteristics of her new game "Tomb Raider IV The Last Revelation". This type of advertising giving Lara the characteristics of a real person where she asked you for help to solve her adventures always increased even more the fantasy that she was a real person and that she also made you a participant in her own life, which helped to further strengthen the relationship between the virtual character and her followers. 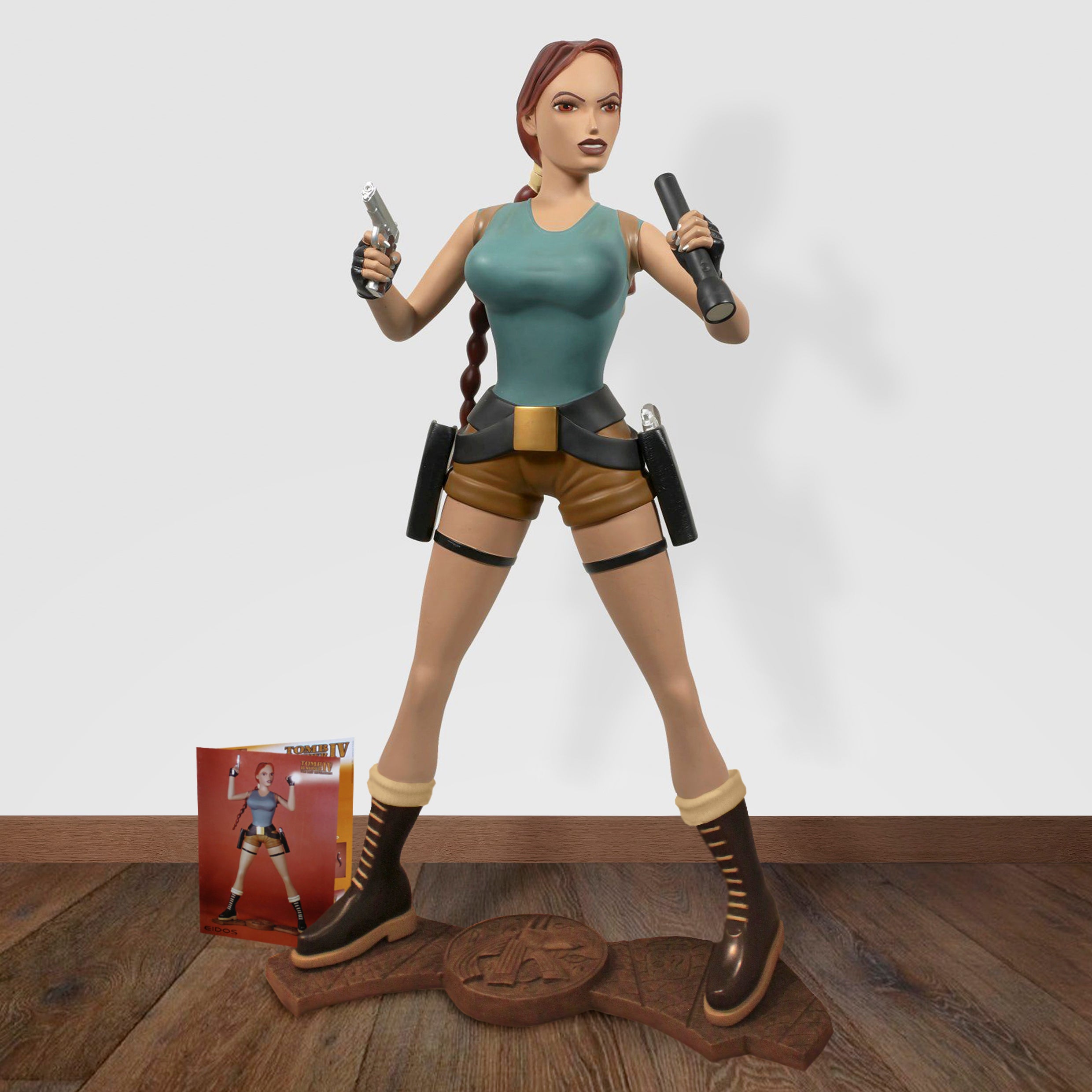 Studio Oxmox, made a limited series of individually hand-painted fiberglass statues that were intended to decorate the points of sale where video games were marketed: stores, shopping centers, promotional events... etc. They made two versions of this statue, one with a metallic circular base (which is quite common) and an exclusive version of only 30 units with a carved base with an Egyptian theme (in the photo) where in the central part we can see Seth's face, the lord of chaos.

This statue was the second work that Oxmox Studios carried out with the Tomb Raider license, after in 1998, Eidos Interactive commissioned them what was their first company work (and for which even today it is one of the reference studios worldwide in the development of life-size sculptures), the statue based on Tomb Raider II but which also served to market Tomb Raider III. Due to the success of that first version, Eidos again had the work of these professionals for Tomb Raider 4, Angel of Darkness, Legend and Square Enix with the reboot of Tomb Raider. 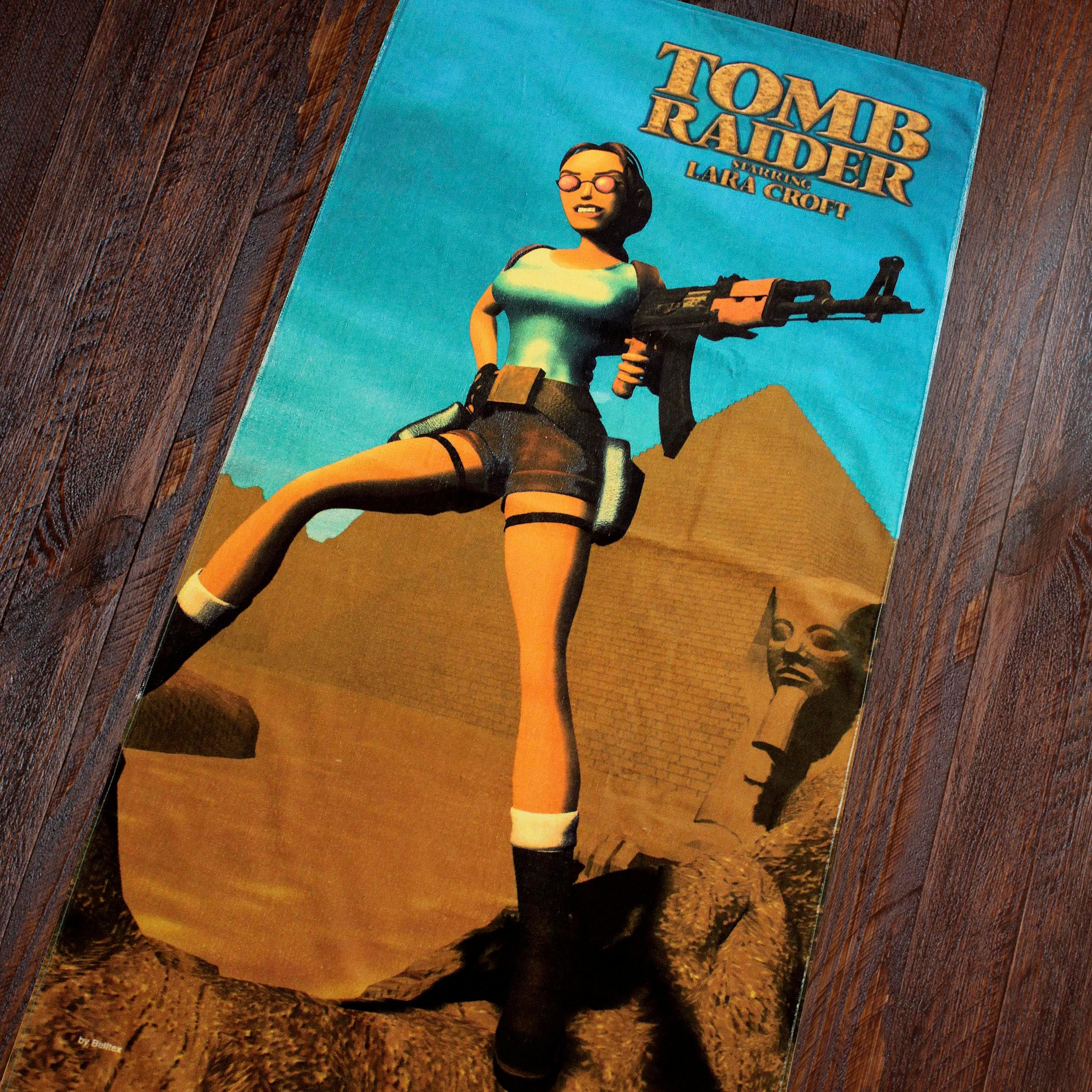 The "Belltex Belgium" brand put on sale a series of 100% cotton textile products that became very famous in Europe since 1999. They produced different towels, bedding, pillows, curtains... etc. with the image of Lara Croft. Thanks to colorful prints and attractive packaging, these types of products, now very rare, have survived and have taken over the nostalgic hearts of their most fervent fans. 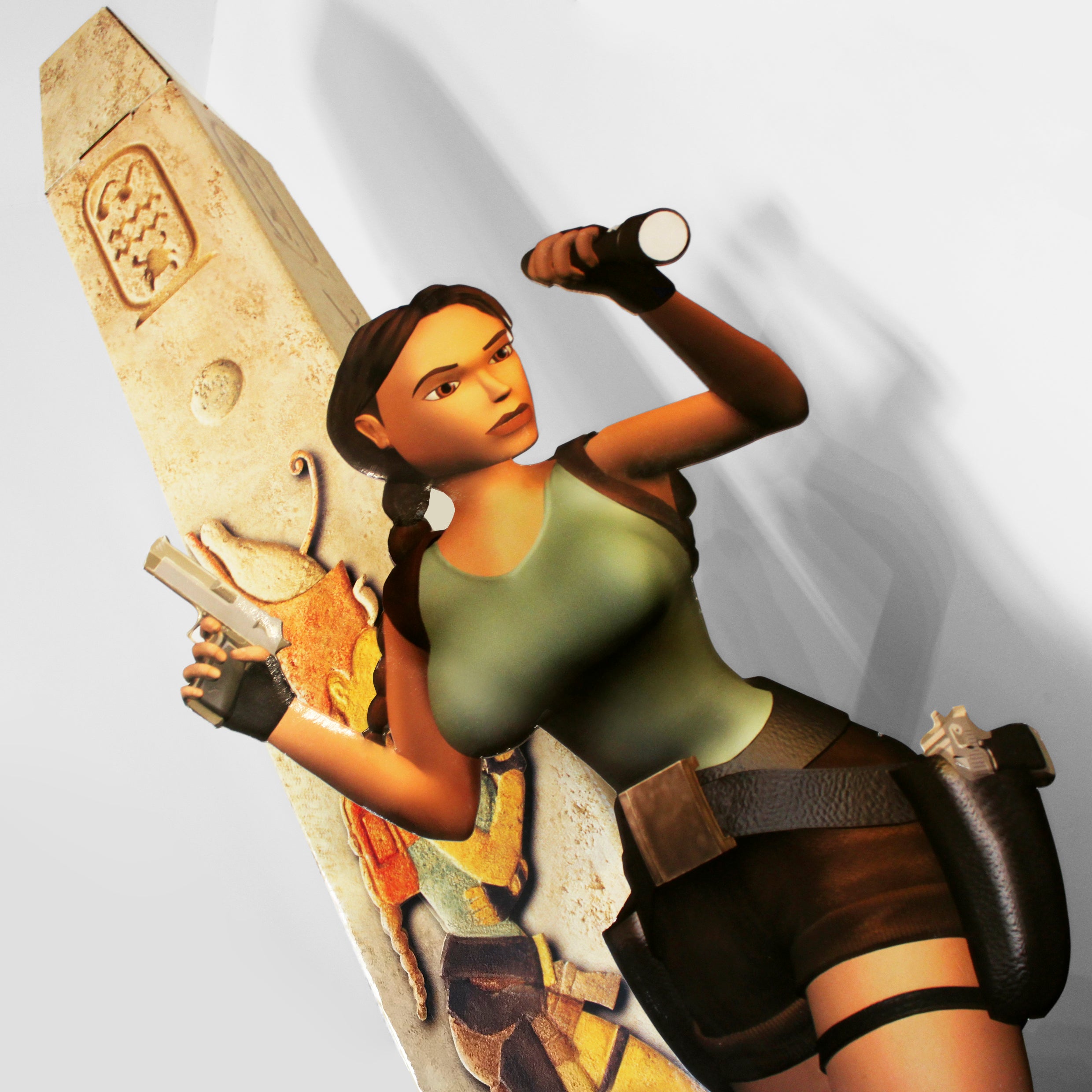 These are two cardboard promotional standees that were used in the video game points of sale, one of them is the silhouette of Lara Croft with the same image as the games' cover, and the other, and more special, is obelisk of 2.30 meters high with hieroglyphs such as an image of Lara Croft herself with an Egyptian crown or even a hieroglyph with her mythical circular sunglasses. This last promotional item was devised and designed in Germany. 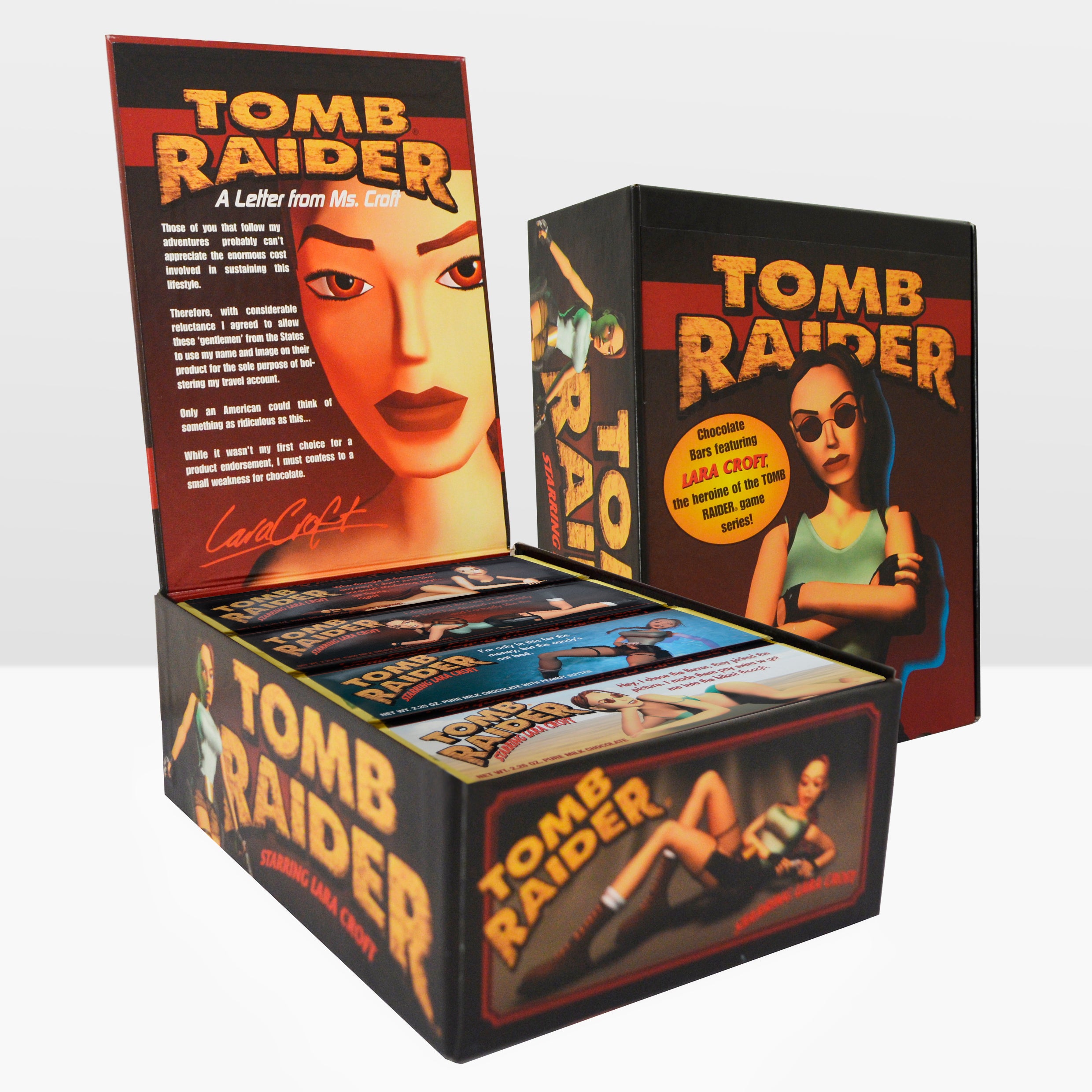 Lara Croft was even the brand image for some chocolate bars, True Confections Inc, an American company, became sponsors of Tomb Raider and   released four different chocolate bars. The price of each chocolate bar was $2.00. These were the flavors:

The packaging features a render of Lara and a quote from her   about being on the wrappers:

The box of the chocolate bars includes a small letter from Lara Croft where she explains this sponsorship. It reads:

“A Letter from Ms. Croft: Those of you that follow my adventures probably can’t appreciate the enormous cost involved in sustaining this lifestyle. Therefore, with considerable reluctance I agreed to allow these 'gentlemen’ from the States to use my name and image on their product for the sole purpose of bolstering my travel account. Only an American could think of something as ridiculous as this… While it wasn’t my first choice for a product endorsement, I must confess to a small weakness for chocolate”.

The bars are extremely rare to find.

This has been my selection of rare products for “Tomb Raider The Last Revelation”, I am Rodrigo Martin Santos and if you are interested in collecting memorabilia about the franchise I encourage you to follow me on my website www.tombraidercollection.com or through Facebook. Next month we'll meet again to solve the mystery of Lara Croft's death, unearth her, and explore Tomb Raider Chronicles (2000). Until next month!