Beyond the Cover: Tomb Raider II

Hello Tomb Raider community! Welcome to BEYOND THE COVER, a brand-new series to commemorate the 25th anniversary of the Tomb Raider franchise we are celebrating. I’m Alejandro Cambronero Albaladejo, holder of the Guinness World Record to the largest collection of Tomb Raider video games and webmaster of Alex’s Tomb Raider Blog and Tomb Raider World. In this series, we’ll discover the most beautiful and rarest cover arts of Tomb Raider games.

Tomb Raider games have been published in numerous countries and regions throughout the years. From the United Kingdom to Japan, through Spain, Poland, Australia, Russia, Korea, France, the United States, Brazil, and many more!

Although many of them share similarities in their covers and designs, some are completely different and even change the original title of the game. All of them have a story behind it and some have an editorial adaptation to the country where they have been published.

Each month, we’ll introduce iconic, special and significant covers published in the Tomb Raider franchise, game by game, detailing the edition to which they belong, whether standard, limited, collector or promotional, among others.

This time it's Tomb Raider IIs turn, released on October 31, 1997 for PlayStation and PC. The reason why this title only came out on PlayStation (regarding consoles) is because Sony acquired the exclusivity of the video game for consoles, preventing its release on Sega Saturn, unlike Tomb Raider in 1996. A great curiosity, isn't it?

Although it is one of the most loved and important games in the franchise as mentioned above, Tomb Raider II had very few special physical editions or versions that its predecessor did. This is mainly due to Sony's exclusivity for consoles and the launch on PC (not many more limited or similar physical versions were produced), although in the next game in the franchise (under the same conditions), there is much more variety of covers and curious editions.
Let's begin! We'll start with a personal selection for most common covers/editions of TOMB RAIDER II. 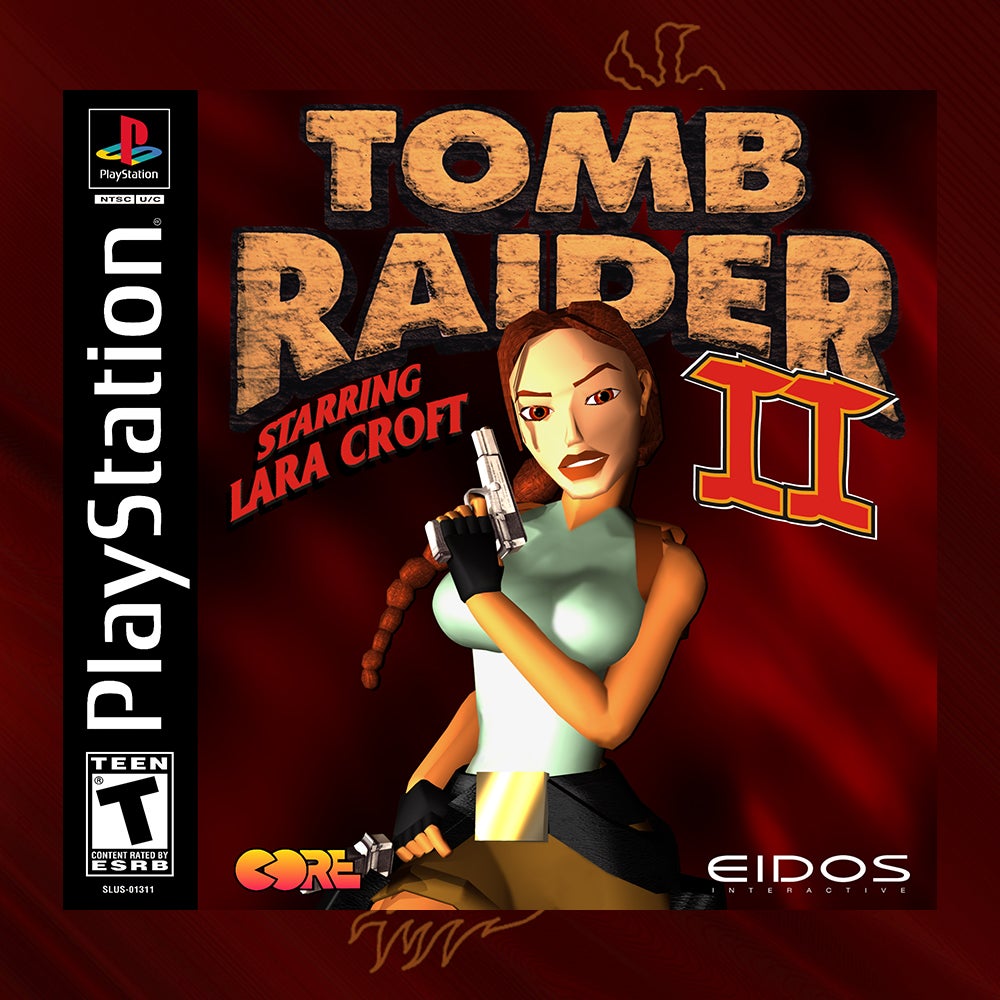 The first international standard edition of Tomb Raider II was published in North America (October 31, 1997). Lara Croft left an impression in what is one of the most adored cover arts by fans of the franchise, according to the overall sentiment that the players had for this game.

It’s interesting to note a certain detail that not everyone has noticed: Lara Croft holds a single pistol covering her torso, while the other is in the holster... but in a   strange way, since the pistol is positioned the reverse of how it should be   in order to be able to grab it properly! This detail (or design error) is present in all covers with this art, regardless of their region.

In this art, the logo is made of   a rounded stone-like texture, with the text "Starring Lara Croft"   and the number (“II”) designed with different fonts and styles placed on both   sides of Lara. 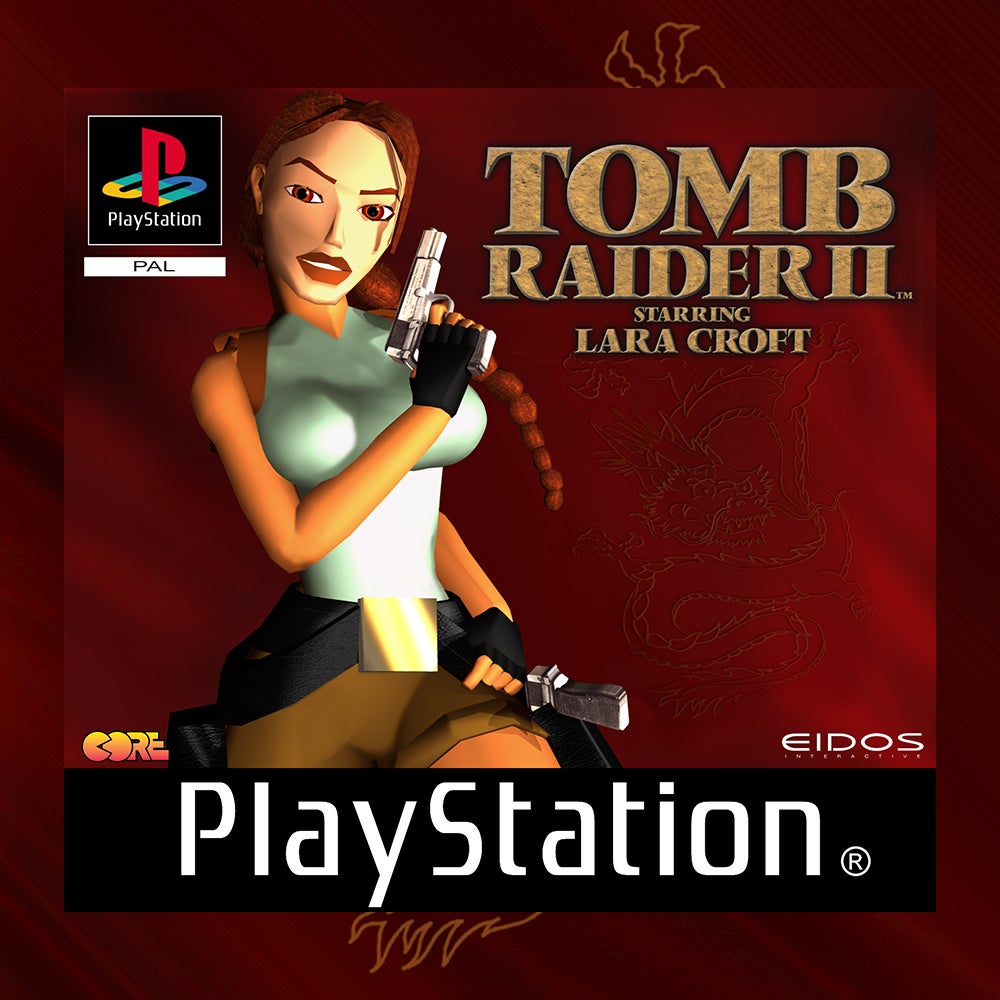 Tomb Raider II standard edition for Europe arrived just one day after the North American edition (November 1, 1997). However, you can see the cover art had some changes compared to that first edition.

First of all, what stands out the most is the game's logo, which is designed with the same texture, typography, and linearity. It’s even different from the European version of Tomb Raider (1996). Lara Croft is positioned to the left of the logo and not in the center, turned to the opposite side of the North American edition! But the pistol in the holster is still placed in the "unusual" way. 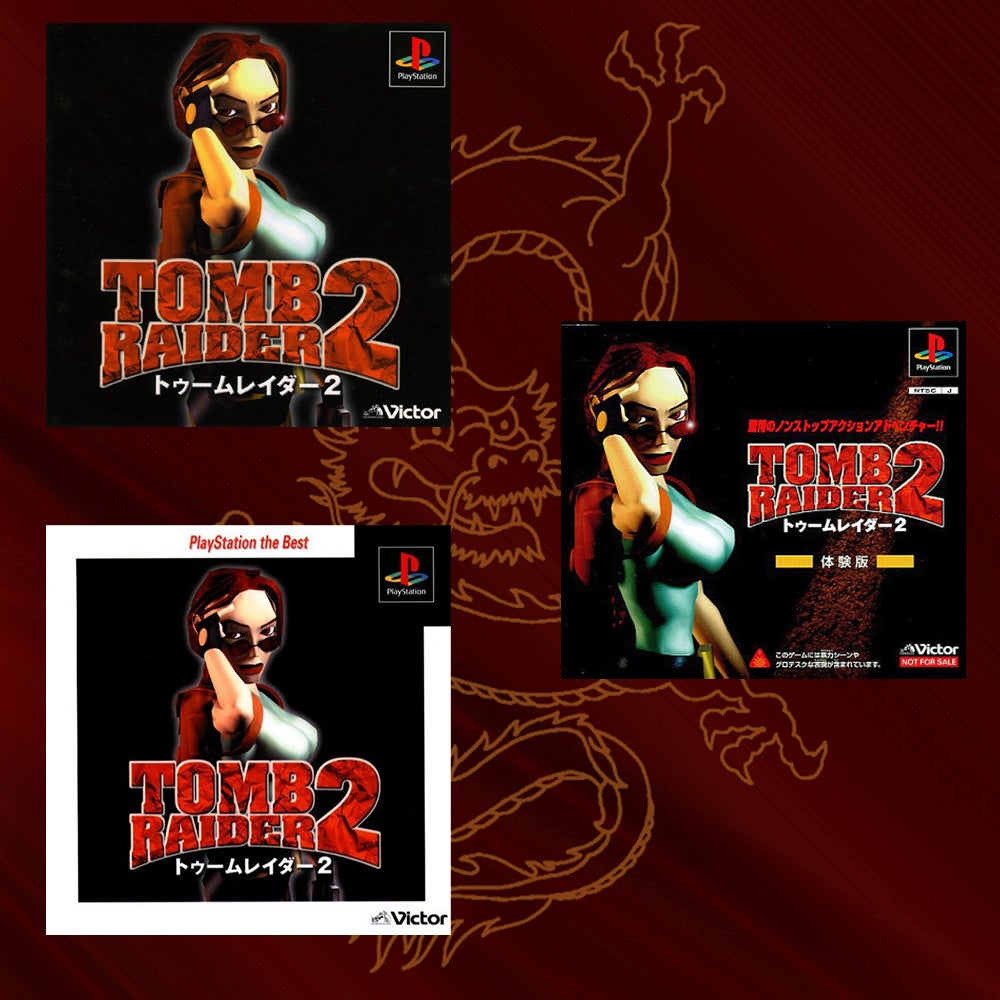 The standard edition of Tomb Raider II for PlayStation published in Japan (January 22, 1998) has a totally different cover art design than the rest of the countries where the game was released, although this is a very common practice of all the Japanese games in the franchise. Lara Croft appears turned around and doing what looks like a salute with her iconic outfit and pistol in hand... ready for action!

The Japanese version of Tomb Raider II also has two very interesting variants: "PlayStation the Best", an edition similar to “Platinum” (Europe) or “Greatest Hits”   (America) that is published when a game is a best seller in one specific region or internationally to highlight that it’s one of the most popular titles being published on the console. Also, the promotional edition distributed to the Japanese press, although they are already very limited editions, in this case is much more since it corresponds to a specific country with a “NOT FOR SALE” indicator. 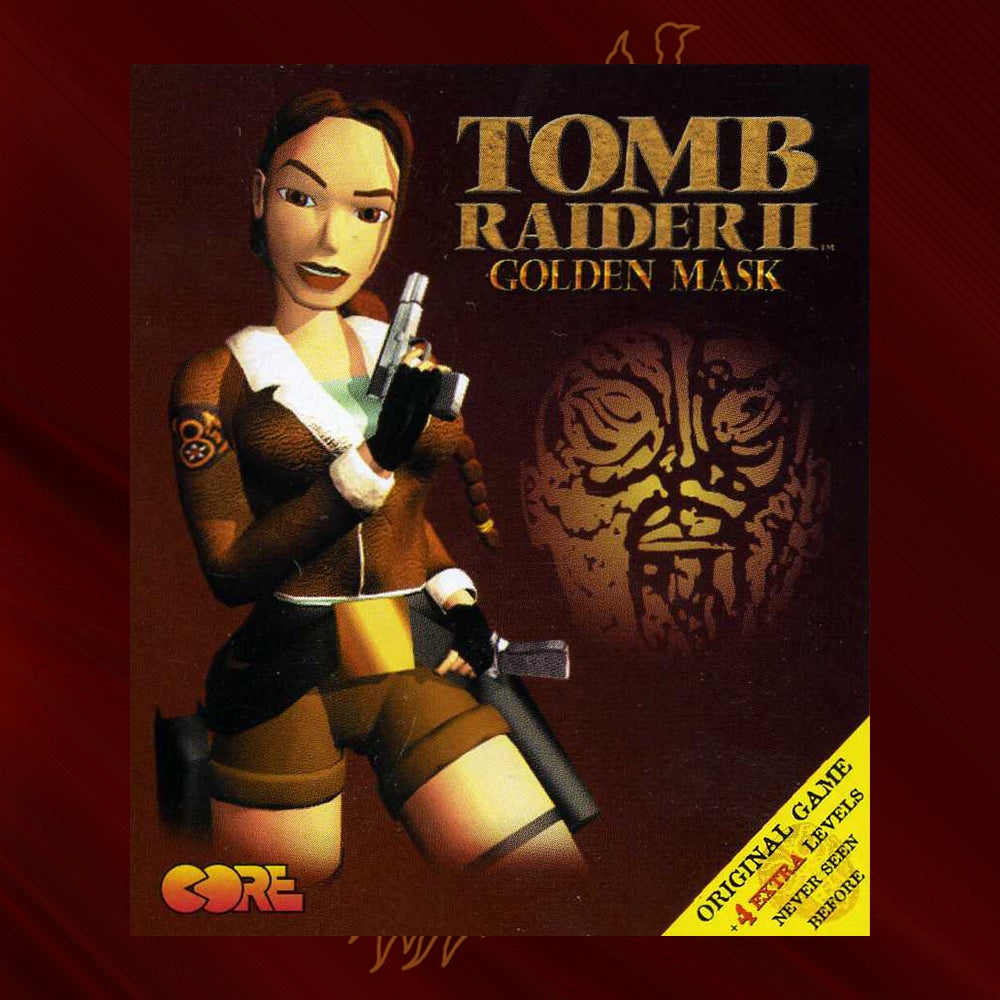 Tomb Raider II: Golden Mask also had numerous physical editions on PC,  released in different countries as a definitive edition of the game.

Depending on the country, the edition was different according to well-known collections such as "Premier Collection" (United Kingdom, Germany, France),  "Xtreme Collection" (Spain), etc. All of them were published as a special edition in a cardboard box, mainly for collectors, although there were also versions in a physical plastic box in countries such as France under the seal "Super Games".

This edition includes the main game and bonus levels from the Golden Mask expansion. The fact that it was only available on PC was very successful among personal collections and users of that platform, which encouraged us to continue editing this type of compilation. 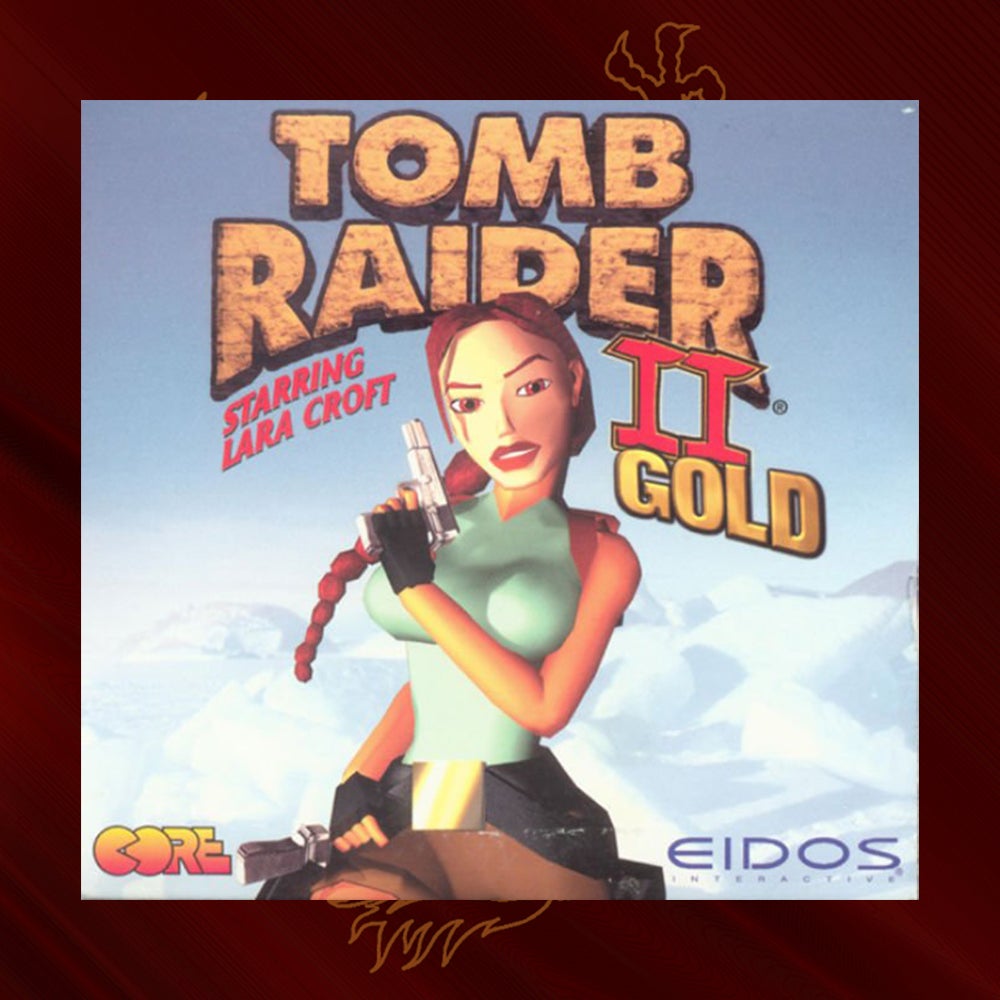 Of course, Tomb Raider II  Gold also had another unique PC edition. The cover chosen for this version is identical to the American standard except for the background on which Lara Croft stands.

It is clearly Melnikov Island, the place where this expansion of the game takes place. This edition includes the complete sequel with four new levels as an addition to the base game in a physical edition published in jewel case. 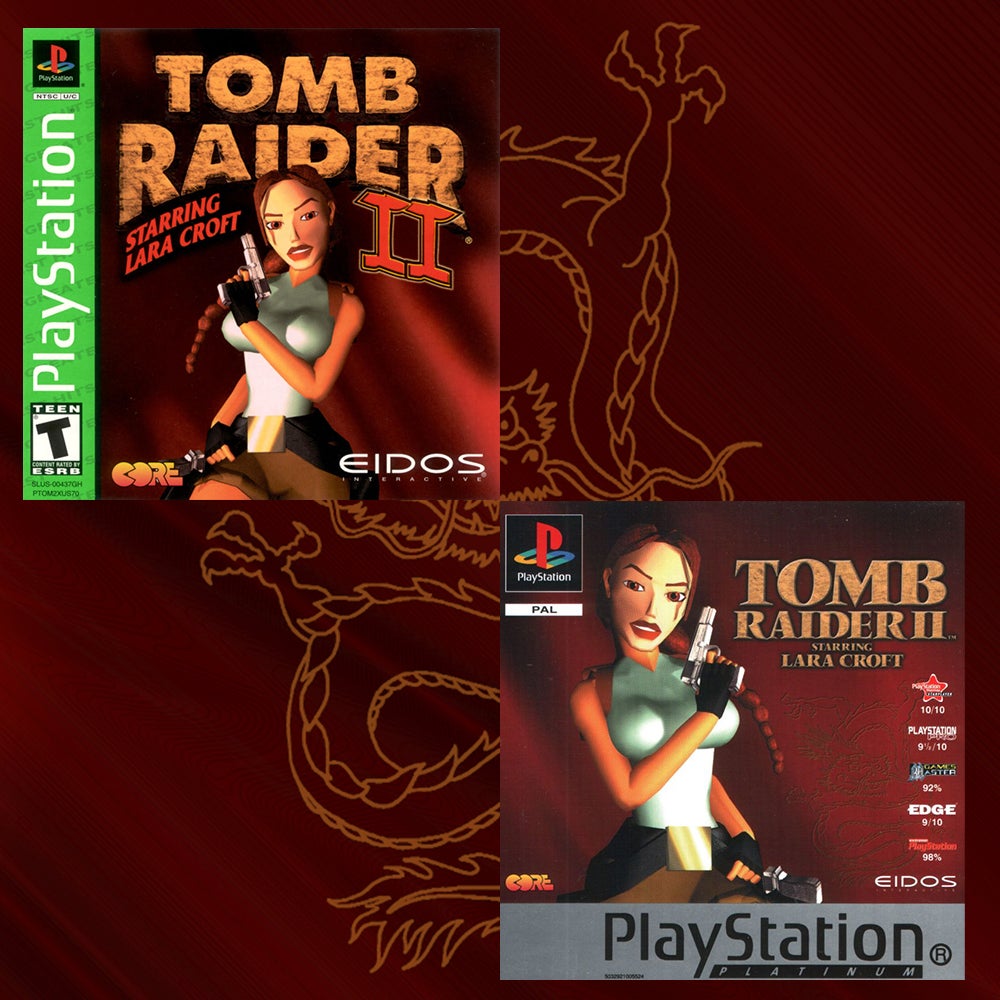 As mentioned before, Tomb Raider II sales (7 million units sold) was a true milestone for both the franchise and the video game industry. This resulted in Tomb Raider II (like its predecessor), having its own Greatest Hits and Platinum editions.

Although both editions are practically identical, the difference is in the name depending on the region: Greatest Hits is the line that publishes PlayStation video games in America with great success and sales as part of a Sony collection. Platinum is (was) the same line but published in Europe.

In these editions, we can find ratings or headlines about the game to prove its success and feedback. 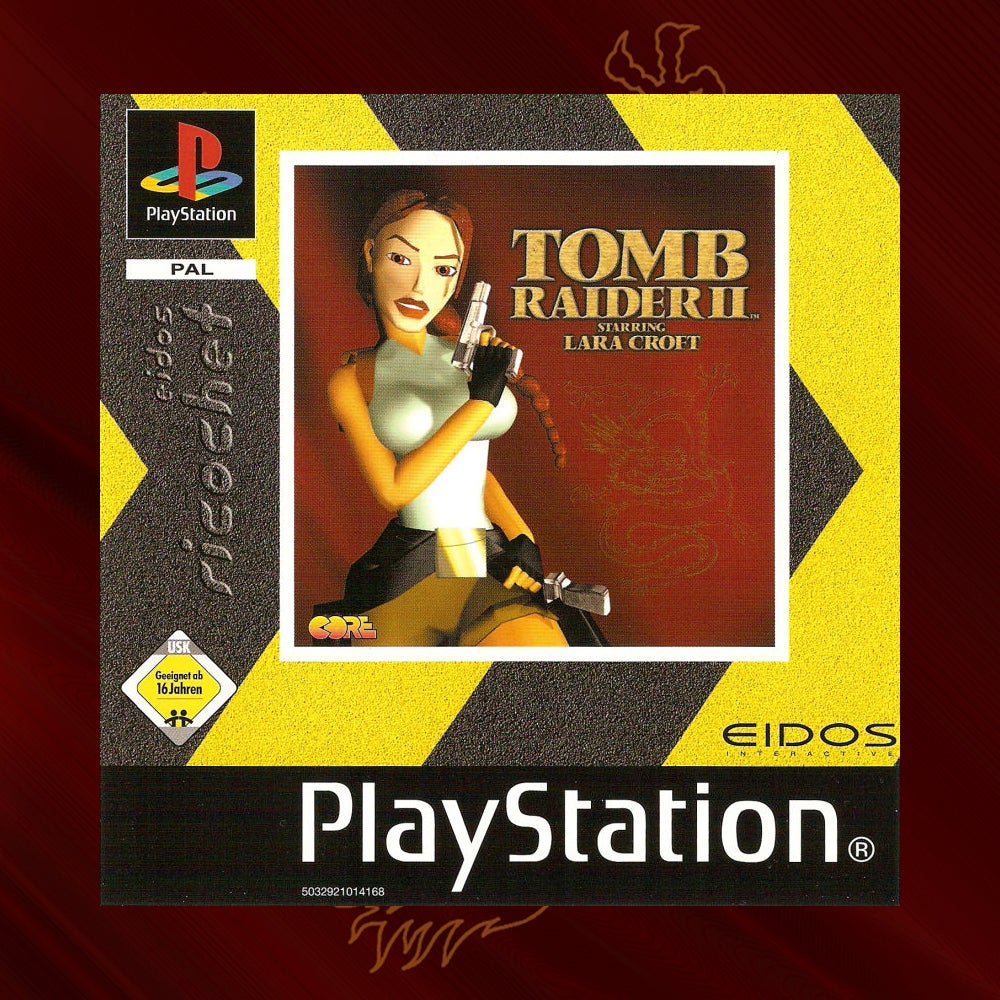 Tomb Raider was part of a seal called Eidos Ricochet in Europe during the first two games. These versions were re-releases of the games that came out later due to their impressive sale success.

As its name suggests, it was Eidos who produced and distributed this edition line to commemorate the great numbers harvested by the franchise and, more specifically, the first two games starring Lara Croft.

The cover is basically the main art of the European Standard Edition on a stylized background with the seal of this special re-release.

And… that’s it for now! I hope you enjoyed the first part of the series and covers we discovered. We’ll see you very soon with more covers and Tomb Raider history behind each game in the next issue with Tomb Raider III!